Sunny tarmac twisties in Southern Spain: need we say more? This time around, MOTOURISMO Scout Lennart is joining an on-road motorcycle tour in Andalusia with a mystery bike.

Having completed a seven-day off-road expedition in Portugal, we found ourselves in Southern Spain with a new quest: to join an on-road motorcycle tour in Andalusia. Unfortunately, Egle couldn’t make this one (thanks, COVID), but Lennart was up for adventure - except the trusty KLR650 had experienced some abuse in Portugal and, knowing the Andalusia tour would be all tarmac and long miles, we knew the KLR just wasn’t ideal. Not to worry: although the Andalusia tour was aimed at riders with their own bikes, we found a rental. Lennart’s mystery bike turned out to be a shiny Triumph Tiger 1200 complete with a heated seat, adjustable windshield, and so many modes and gadgets Lennart felt like he was aboard an aircraft. 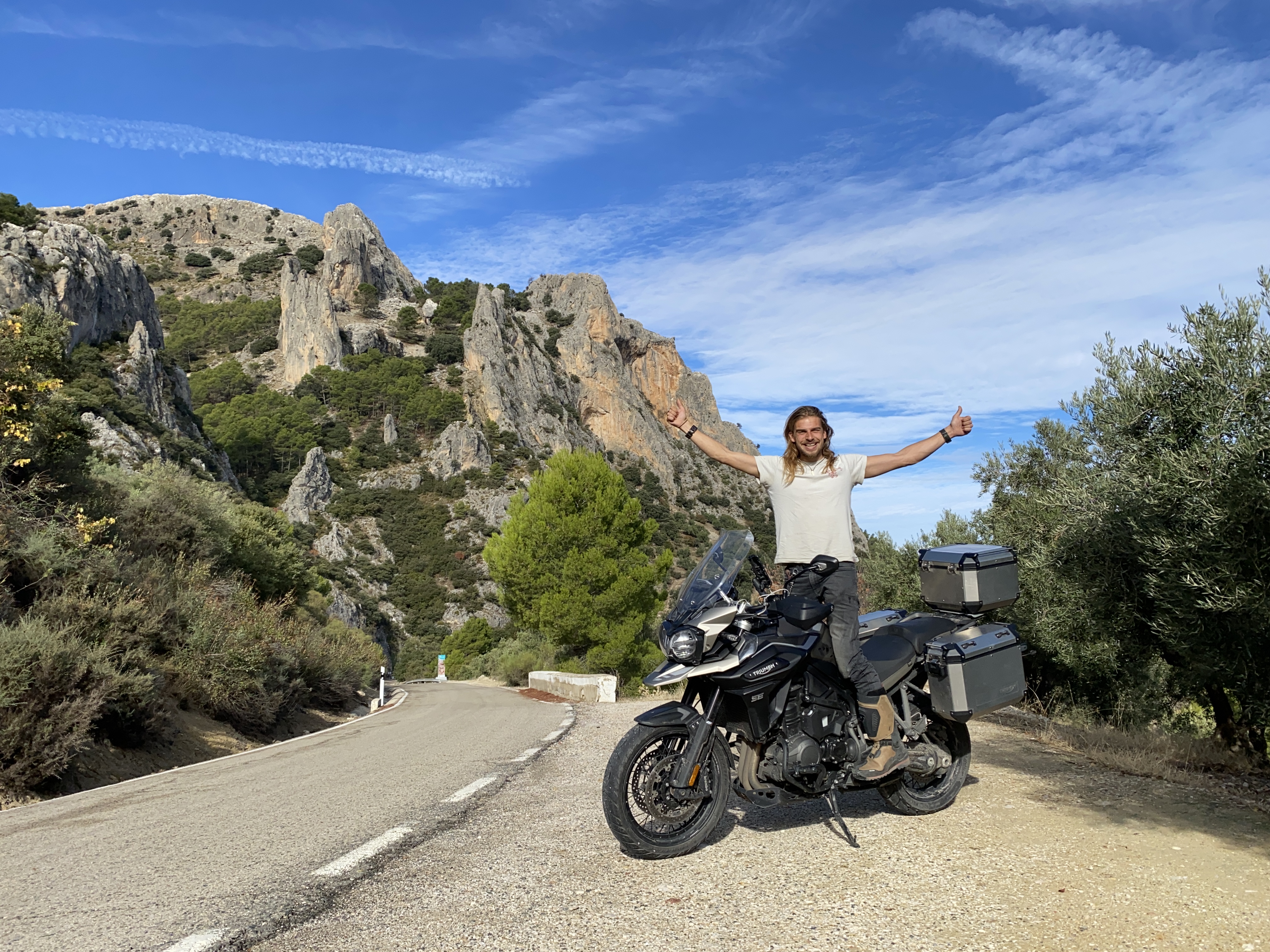 In addition to a different bike, there was another welcome surprise: Michael Carlin, co-founder of MOTOURISMO himself, was to join the tour. Believe it or not, we’d never met either of the MOTOURISMO masterminds in real life, so this was a cherry on top. 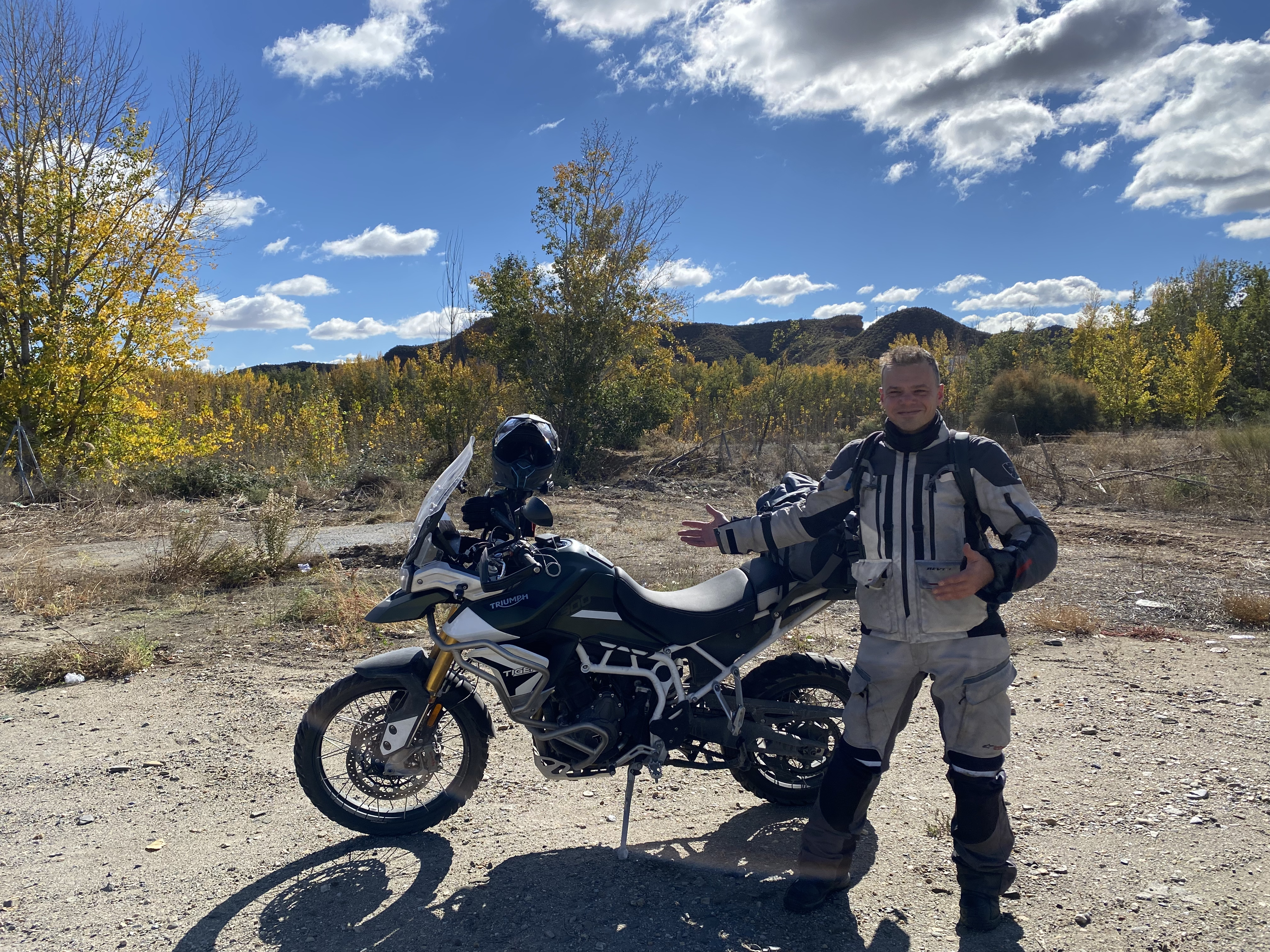 Riders assembled and bikes ready, Lennart and Michael headed out to see what motorcycle touring in Andalusia was all about.

Every tour has its own unique setup and vibe, and this time around, it was clear the riders already knew each other from other adventures. They’d all shipped their own bikes to join the tour.

This is the special thing about this expedition: It not only includes the flights to Andalusia but also shipping the riders’ bikes to the destination! So, everyone was already in tune with how the ride would go: sporty. 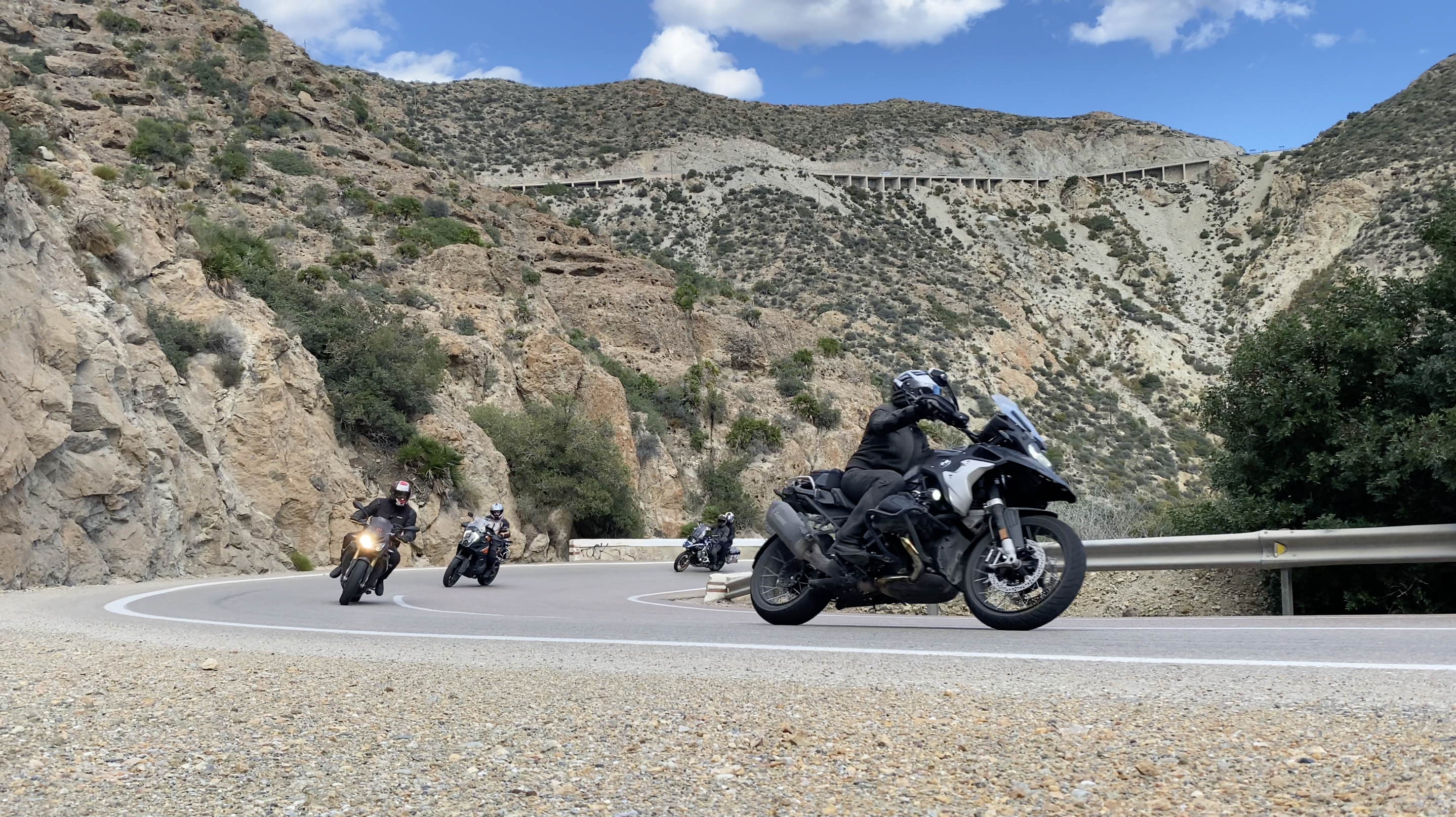 Not scrape-your-footpegs-sporty, but lively enough to make Lennart feel the Tiger was an excellent choice: doing around 300 kilometers a day on twisty Andalusian roads chasing after experienced riders would have been a lot more painful on the KLR. The tour guides Andre and Anna had planned a ride with so many curves and tarmac so smooth that a dual-sport motorcycle just wouldn’t have felt right.

From day one, it was clear this was a tour designed to extract the maximum motorcycling fun out of Andalusian backcountry roads. Leaning into the curves and enjoying the ever-changing landscapes from mountains to sea was the main course on the menu, and Lennart needed to enlist Michael’s help to document it all: with long daily distances and a fast pace, this tour was all about the riding.

As MOTOURISMO Scouts tasked with chasing and filming motorcycle tours around the world, we’re always curious to get to know our fellow riders. Sometimes, it’s a dirt bike crowd; other times, it may be a motley crew of Harley riders; this time around, it was all about large-capacity adventure bikes and old friends. Most riders on the tour were riding buddies back home, and others fit right in with their own stories of motorcycle adventures around Europe and beyond. 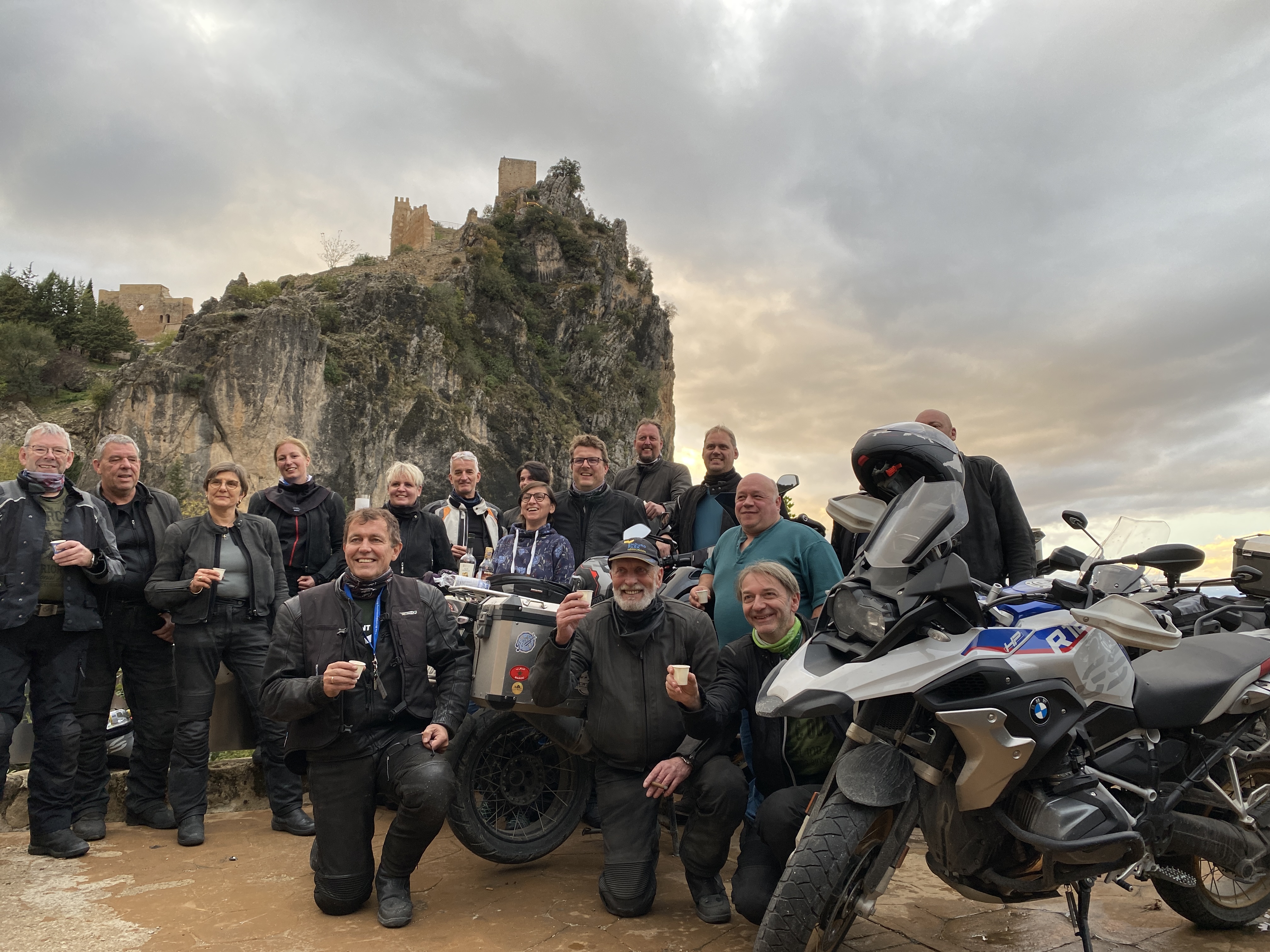 ×
Friends on bikes – what could be better?

Whether the riders know each other or not, the group usually gels by Day Two and a certain rhythm sets in. This was the case during the Andalusia motorcycle tour, too: get up, enjoy a scrumptious Spanish breakfast, jump on the bikes and open up that throttle to enjoy the twisties. 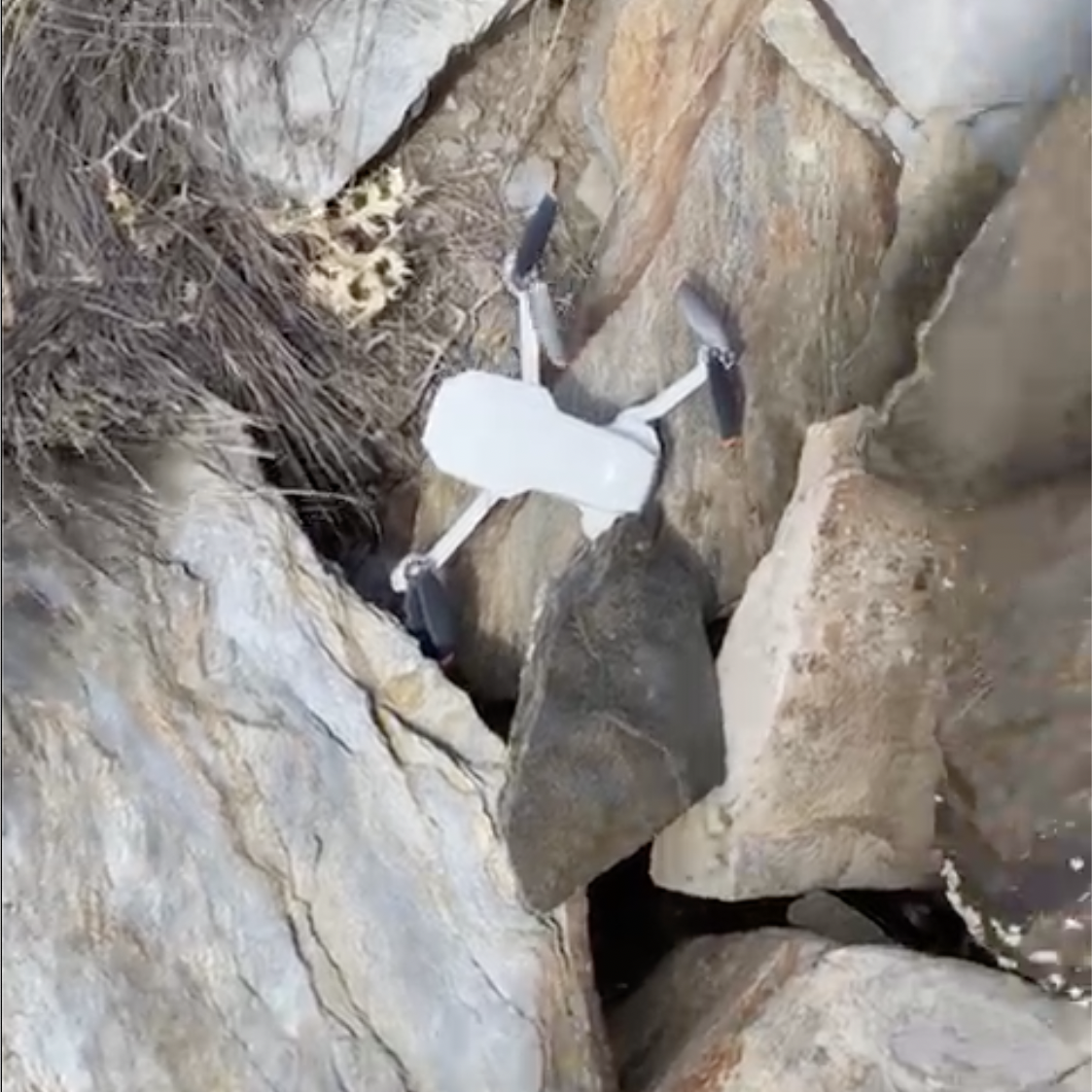 ×
Patron saint of the videographers saved our drone by miraculously rescuing it from the wind and placing it under (!) this rock – perfectly intact. Thanks so much!

But with a group this tuned in and this fast, filming the tour required going an extra mile – sometimes, quite literally. One windy day, Lennart had to crash-land the drone into a rocky hillside, then hike down together with Michael to recover the precious camera and hope it wasn’t broken. The drone was recovered safe and sound, but it had landed itself under a rock – how, we don’t understand to this day! 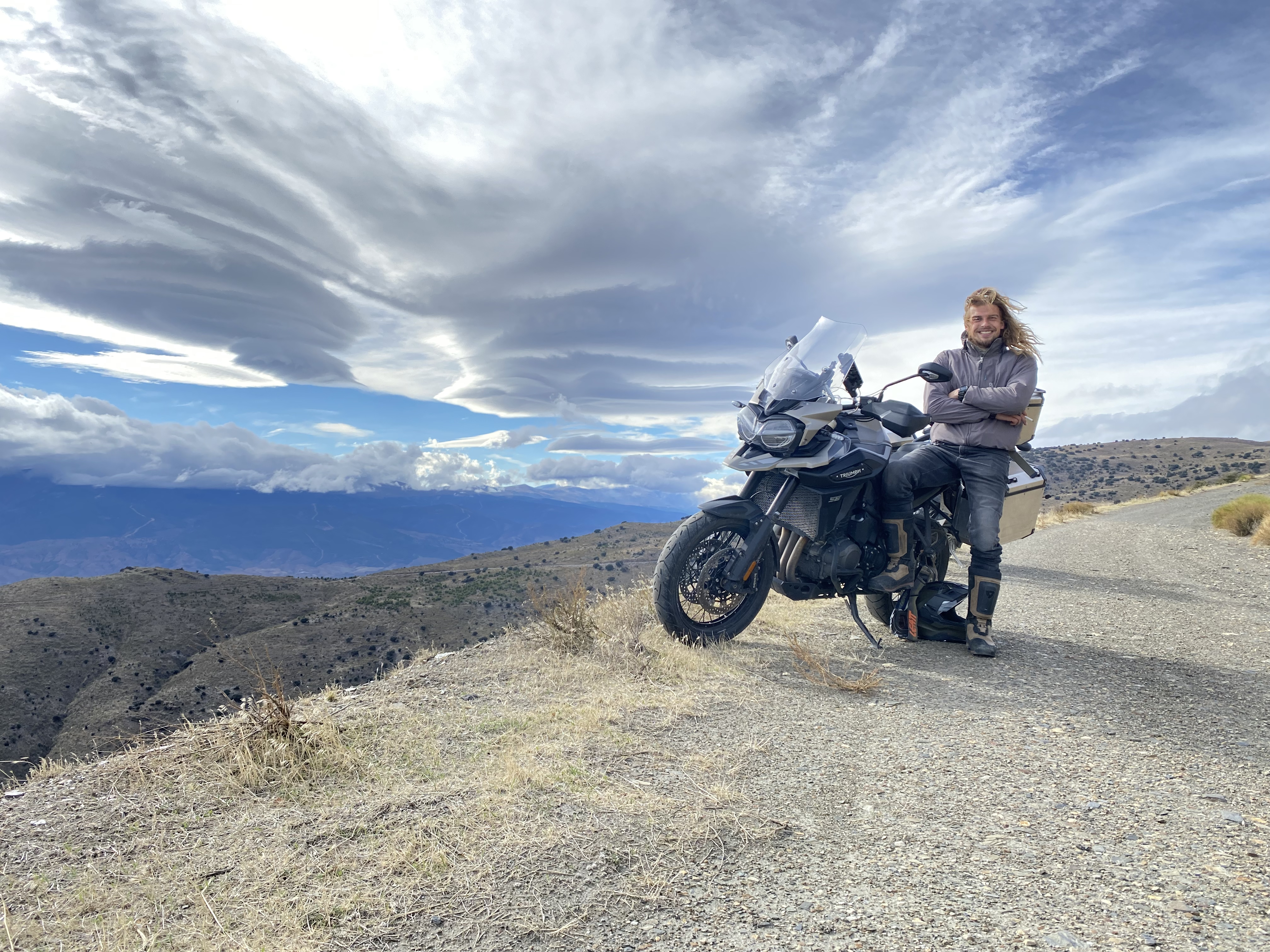 As the tour carried on, it was clear Andre and Anna had designed an itinerary offering incredible landscape diversity. From mountain passes to stunning coastal routes, Andalusia is probably one of the most scenic parts of Spain to explore. Here, you can be riding across rolling hills, climb a mountain pass, and find yourself on a road meandering along the sea in the same day. No two routes are the same, and no roads are straight – in other words, it’s a motorcyclist’s dream.

A cool crew, fantastic roads, and amazing scenery aside, you can’t talk about Andalusia without mentioning food. Staying in different hotels – most on the luxurious side – riders got to sample local delicacies including a giant paella. 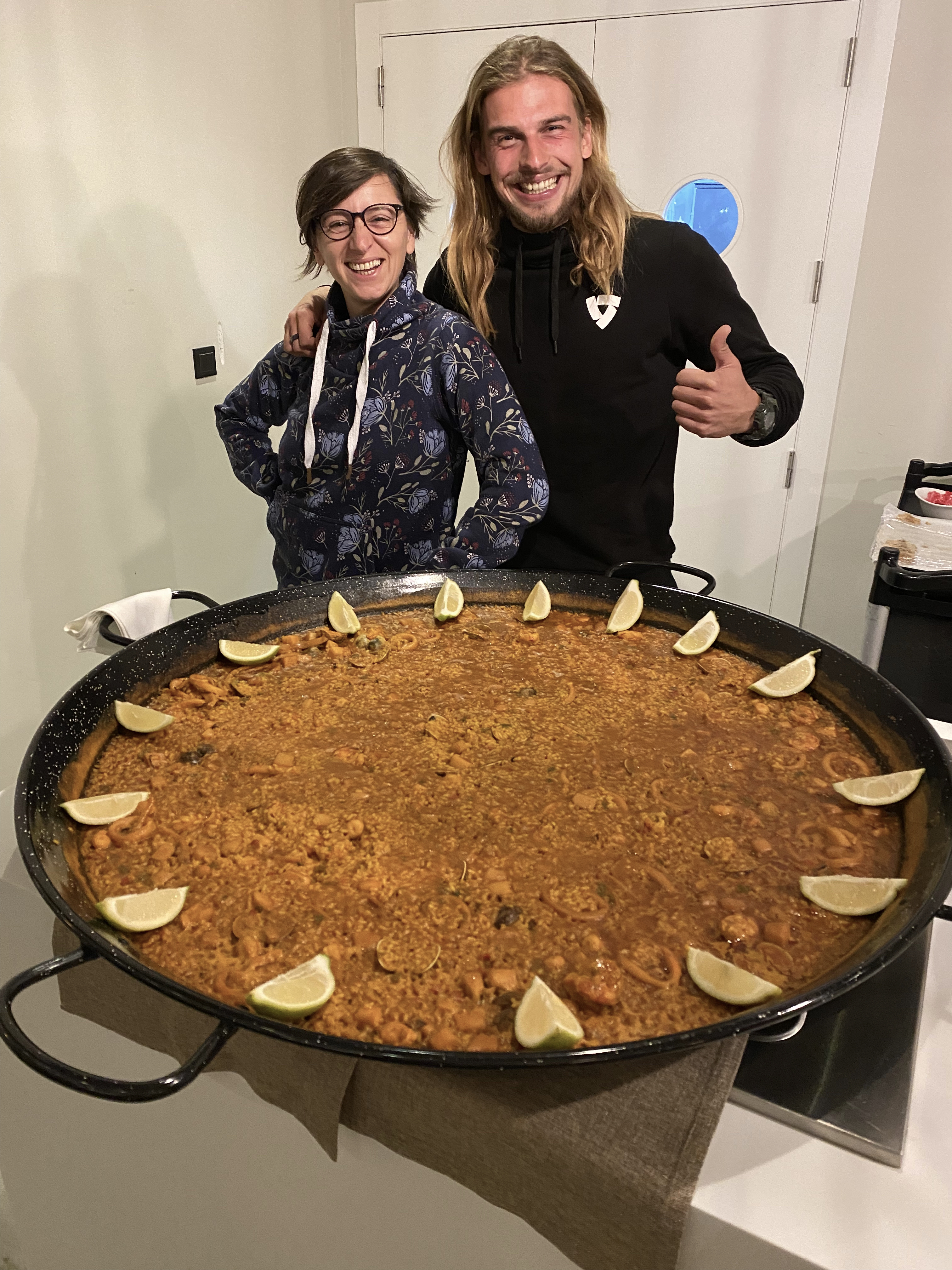 For Lennart, it felt like the tour was over all too soon, and he admits returning the Tiger just a little reluctantly. Riding motorcycles in Andalusia on smooth tarmac roads in the company of like-minded riders feels like a two-wheeled holiday with views to die for, so if you’re thinking of trying it out for yourself, here’s what to keep in mind:

Who is the Andalusia motorcycle tour for?

This tour is for people who love touring on their own bikes – in this case, including motorcycle shipping from Germany and bordering countries (although rentals are available, too) – and who enjoy covering longer distances on twisty paved roads. It’s not for beginners, but mid-level and experienced riders should feel right at home discovering Andalusia in a fun pace. Ready to rumble? Book your very own Andalusia motorcycle tour now. Get your spot on the next edition here! Andalusia including flight and motorcycle shipping... Want more choices? Check out all options for touring in Spain...