Five days of racing from Milan to Sardinia aboard two road-weary dual sport motorcycles while chasing the spirit of Paris-Dakar: ride report from Europe’s most nostalgic rally race.

Feeling unsteady on my feet, I shuffle along the ferry walkway in search for coffee and inspiration. The Tyrrhenian Sea gets stormy in the fall, and as the MS Roma, a mountain of a boat, sways from side to side leaving white-foamed wake in the turbulent blue waters, I can’t help but wonder whether our bikes are secured well enough in the decks below. Lennart is deep in his own world going through video footage we’d shot at the Swank Rally di Sardegna, a five-day cross-country race we’ve just completed; me, I’ve yet to find my sea legs. Restless – the post-rally blues are kicking in with full force – I listen as the Barcelona-bound ferry creaks and groans making its way slowly westward across the choppy sea.

We’ve left Sardinia, an island of pirates and poets, just five hours ago. And just five days ago, we were lining up at the start line of Swank Rally di Sardegna, a race that would take us from Milan to Genoa and Porto Torres to Arborea – an odyssey of dusty dirt trails, roadbook navigation, cross-country racing, and rally bivouac camaraderie both Lennart and I already miss. Swank Rally di Sardegna was our latest assignment: as we ride around the world on our old thumpers, we occasionally join motorcycle tours, rally races, and off-road training events to scout and shoot new destinations and two-wheeled happenings. This time around, we were invited to race in the Swank Experience class designed to give adventure riders a taste of what rally racing is about. 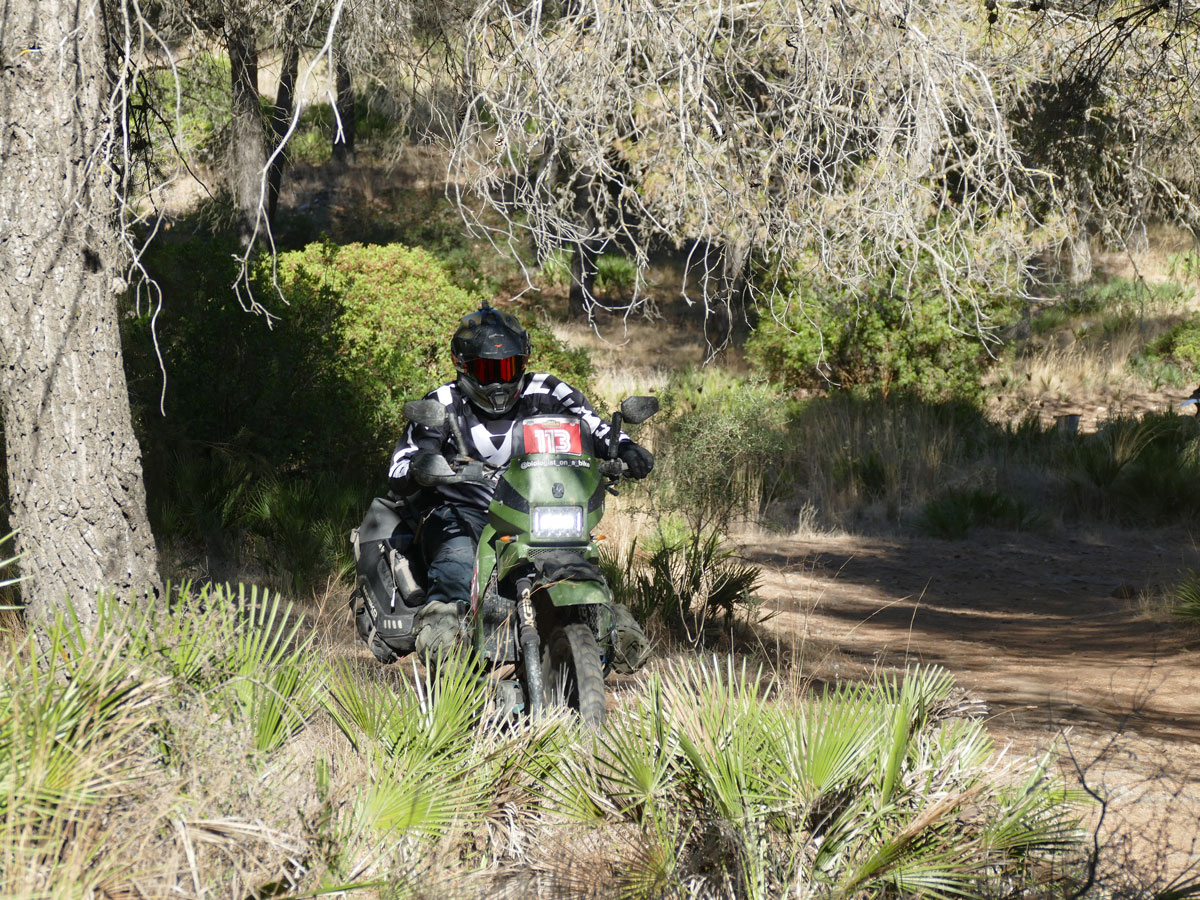 ×
Preparing for the Swank Rally di Sardegna race: a KLR vs the world

This wasn’t our first rodeo – between Lennart and me, we’ve already completed several rally races in Europe ranging from seven-day events like Hellas Rally Raid to grassroots races like the Dinaric Rally. And yet, Swank Rally di Sardegna stood out from the very start. As we arrived at the world-famous Malpensa motocross track in Milan for the prologue stage, we quickly realized two things: one, this race was no walk in the park – the motocross track prologue seemed both terrifying and intimidating with enormously steep climbs and knee-deep mud for dessert. And two? We were about to experience something that no other modern-day rally could match: the spirit of the original Paris-Dakar. 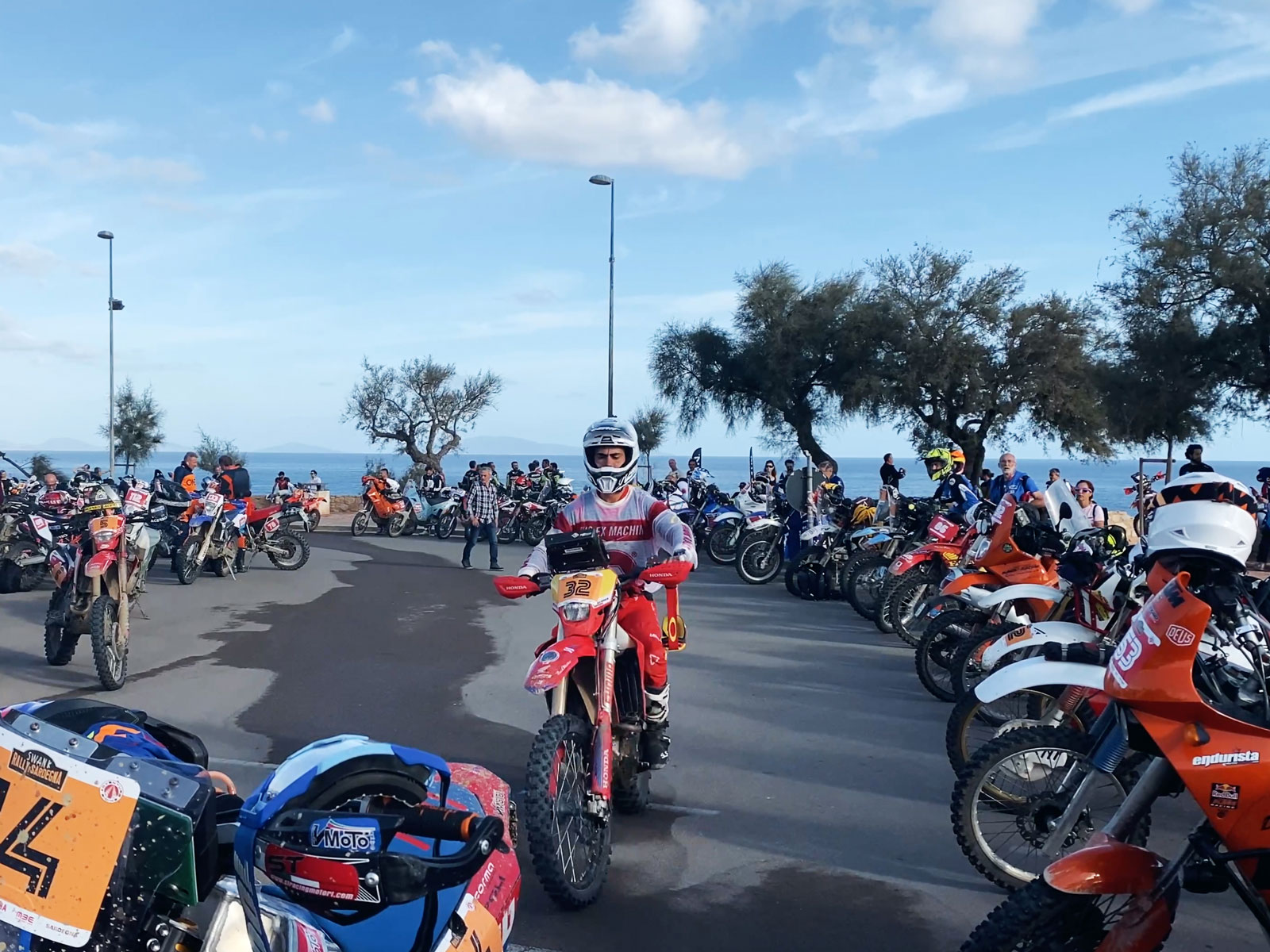 Swank Rally di Sardegna has a long history of Dakar-style racing: organized by Renato Zocchi, the legendary Italian rider who has raced the Paris-Dakar in the 1980’s, won the Pharaoh Rally, and went on to become a world motocross champion and Gibraltar Race winner, Sardinia Rally began as a qualifier for Paris-Dakar in 1985. In 2018, Renato partnered up with Deus Ex Machina, a Netherlands-based custom motorcycle builder, to give the Swank Rally di Sardegna a new attitude – and style. The result? A rally race with two hundred riders aboard vintage, classic, and custom bikes, old dual sports, new enduros, rally replica bikes, and just about everything in between. From old Cagiva Elephants and Yamaha Ténénés to one-off custom Tenere 700’s, BMW HP2, and scrambler-style dirt bikes, the Swank bivouac in Milan looked like a festival of the classic, the extravagant, and the extraordinary. As we feasted our eyes on the craziest bike setups imaginable, we felt right at home with our filthy, dust and grime-covered KLR650 and DR650 bikes – not exactly classic nor vintage, but very much in the spirit of Swank. 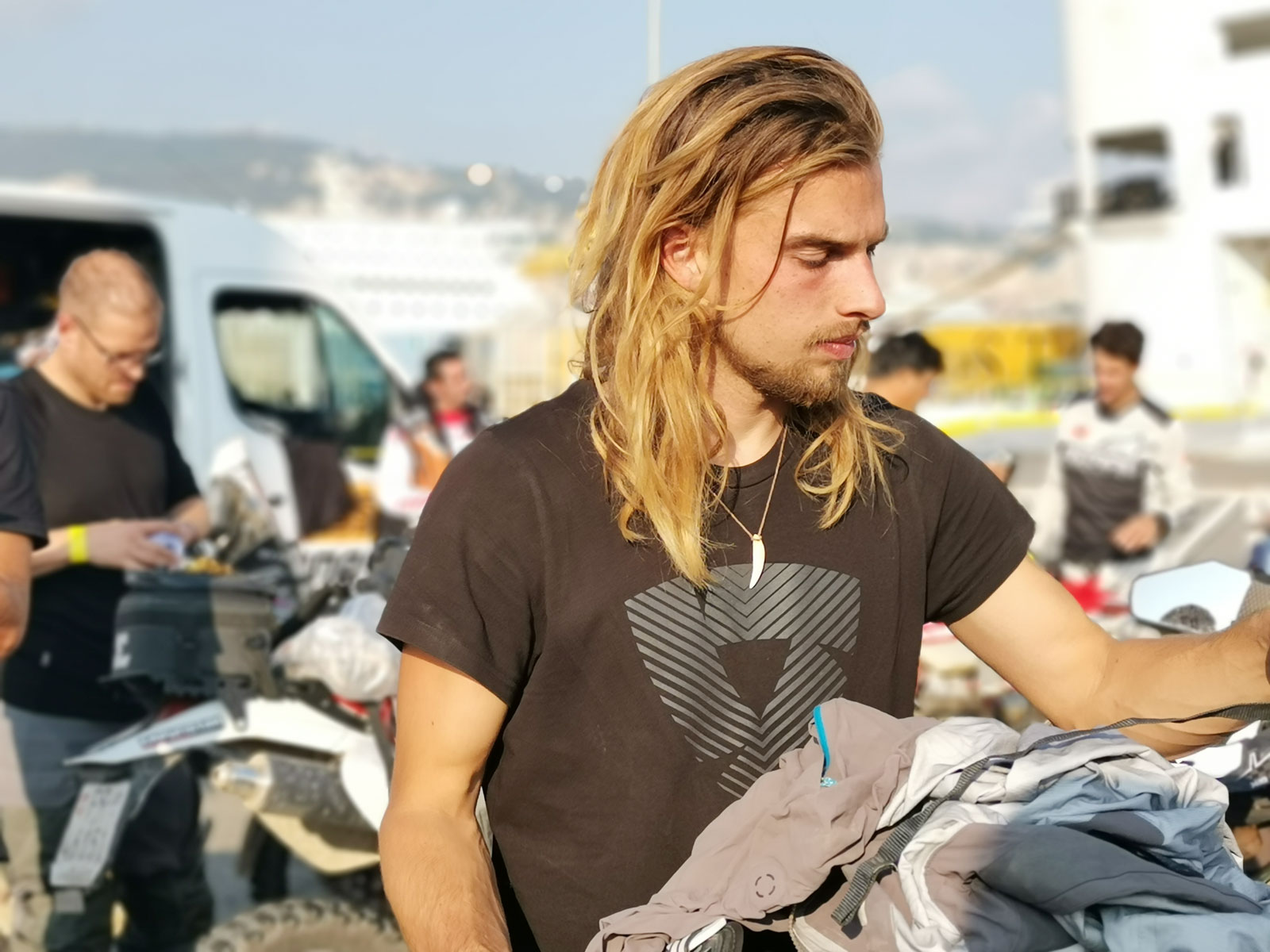 ×
Last roadbook checks before the race

Having gotten our race numbers and made it through the prologue stage unscathed (still a mystery to me, but here we were), Lennart and I headed off to rest before Day One, the 280-kilometer stage from Milan to Genoa. During the prologue stage and the ensuing bivouac party, we’d realized we were among riders with serious cojones, attitude, and flair, but we were also among the old Paris-Dakar legends, world enduro champions, and winners of the Africa Eco Race: there was Franco Picco aboard a Tenere 700, Alessandro Botturi on his KTM450 racehorse, and Renato Zocchi himself riding the Honda Africa Twin on the organization side. “The essence of the Swank Rally di Sardegna is its spirit. In the old Paris-Dakar days, even if you were a completely unknown rider, you could line up at the start next to Gaston Rahier or Cyril Neveu – as an equal. This is what I hope to create here at Swank Sardinia – we all ride together, we fix bikes together, we rest together, we celebrate together, and then we put in some more dirt miles together, no matter whether you’re a world champion, a Dakar veteran, or an amateur. This, to me, is what this rally is all about”, Renato told us. 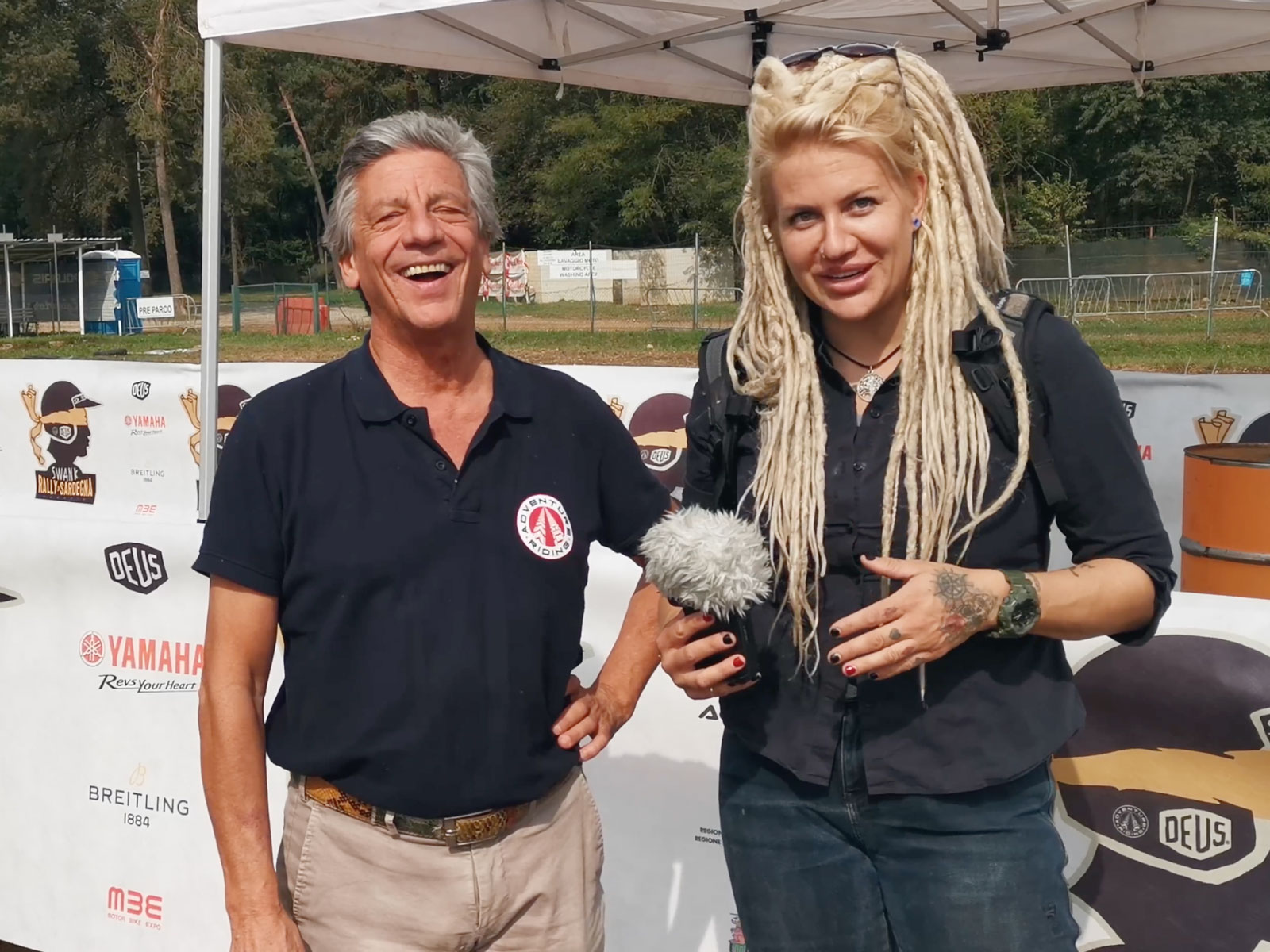 ×
Egle chats with Renato Zocchi, organiser of the rally

And he was spot on. As we left the start of Day One, excited and terrified in equal measure (so much so, in fact, that I’d managed to take the wrong turn on a trail and dump my bike into a ditch before we even got to the official start in the morning), adrenaline pumping, our worn tires offering little traction on slippery forest tracks, we both went straight into race mode going full throttle and chasing after the faster riders for the first leg of the rally. Yet, as we tore across the Italian countryside riding the meandering gravel roads and sandy trails, we soon came to realize this was a different race altogether. 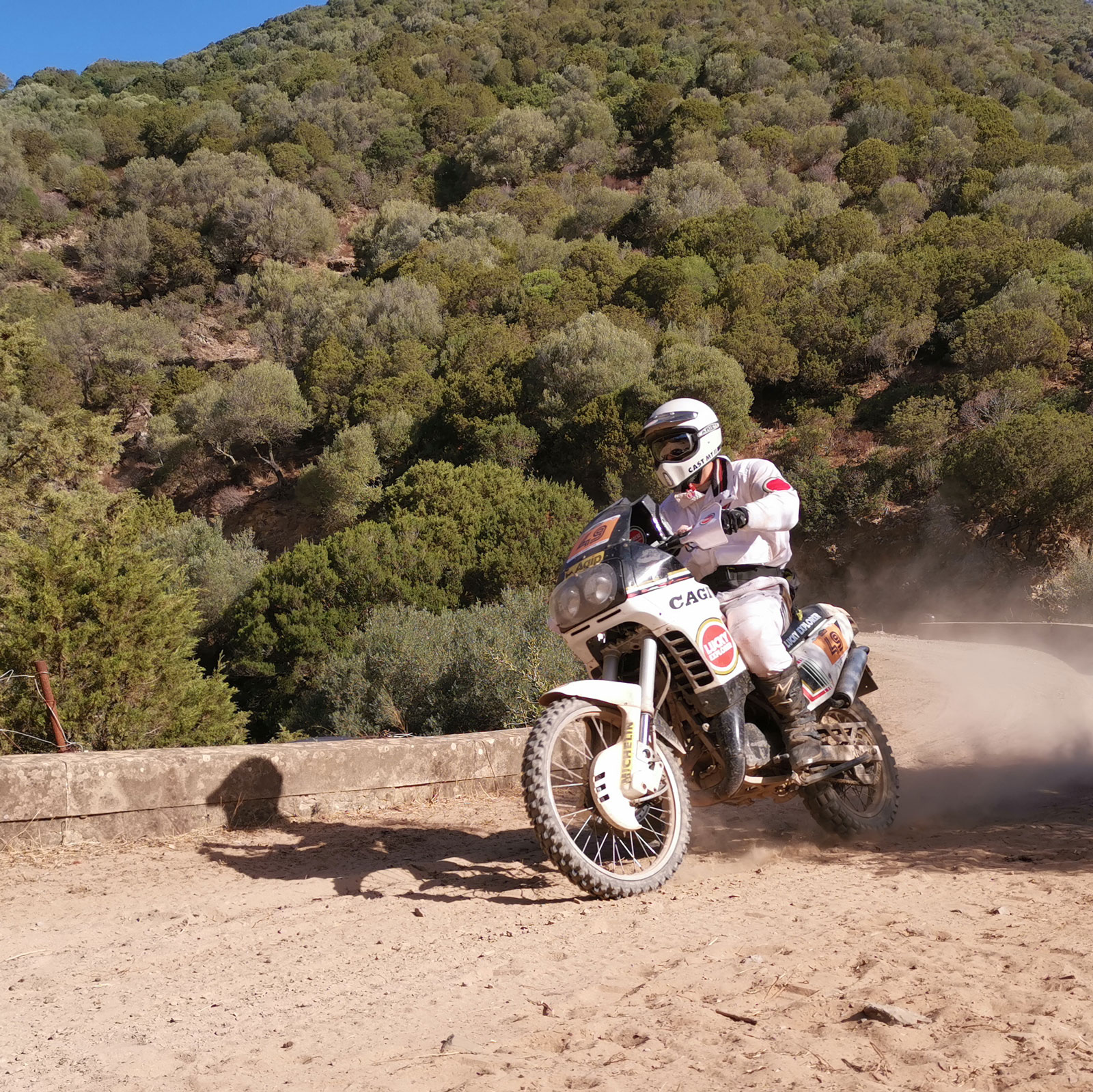 ×
A nod to the original Paris-Dakar: the classic Cagiva riders

For one, everyone seemed to take the rally pace in stride: regardless of speed, and regardless of who was passing who, riders smiled at each other and yelled “ciao” as if they were out for a pleasant stroll in the country rather than a race. Clad in classical Lucky Strike colours, the Cagiva riders seemed to float effortlessly over the trails at breakneck speed, all while having a cheerful chat with each other. Riders on custom-built scramblers, kitted out in 80’s hill climb style gear, charged ahead with so much gusto and ease it felt like a friendly dirt bike outing; even the professional riders aboard serious racing machines stopped to take in the view and have a cup of espresso along the way, and little by little, we realized Swank wasn’t about factory teams or top speeds. The pace was intense, no doubt - but the attitude was that of a gentlemen’s ride, and nobody took themselves too seriously. “Namaste, motherfuckers”, - Nelson, a French rider aboard a beautifully restored BMW HP 2 Enduro, summed up the Swank vibes perfectly once we reached the port of Genoa. From here, we boarded the Sardinia ferry– it still gives me goosebumps to remember the roar of two hundred motorcycle engines rolling into the belly of the boat together - and arrived to Porto Torres in the morning, ready for the second stage of the rally. 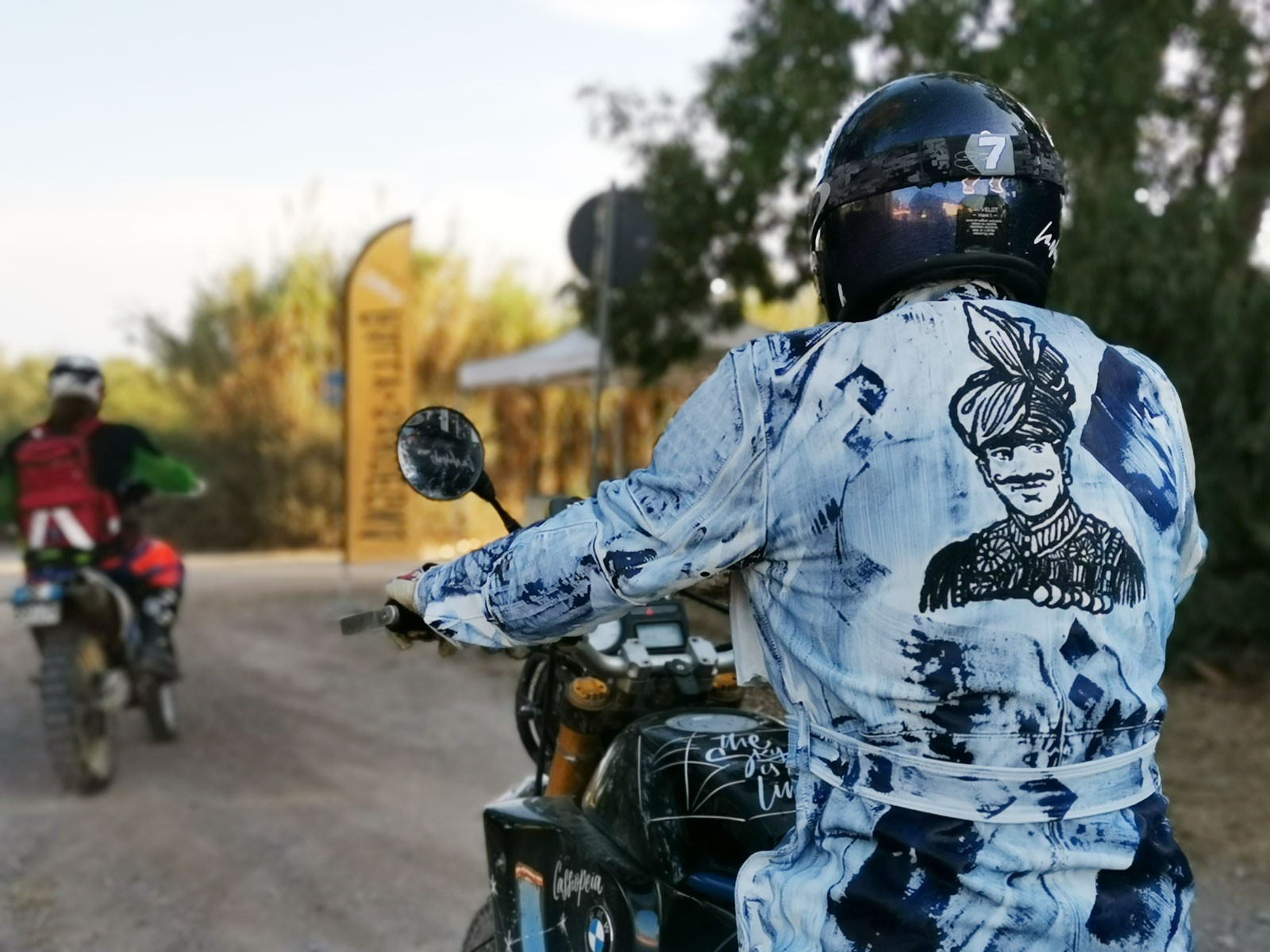 For the next three days, we raced from Porto Torres to Arborea traversing Sardinia’s breath-taking landscape. The island’s mountains, canyons, and dry riverbeds made for the perfect rally playground, and the white sand beaches and turquoise blue waters of the Tyrrhenian Sea made us think of the soft breeze from the African shores. Every day, we’d cover around 300 kilometers racing along rocky mountain trails, dusty gravel roads, and dark forest tracks crisscrossed by small creeks and sheep paths. Abandoned mines, mountain views, and quaint little fishermen’s villages dotted the countryside, and as the rally drew near the finish, we’d already decided we’d be back next year. 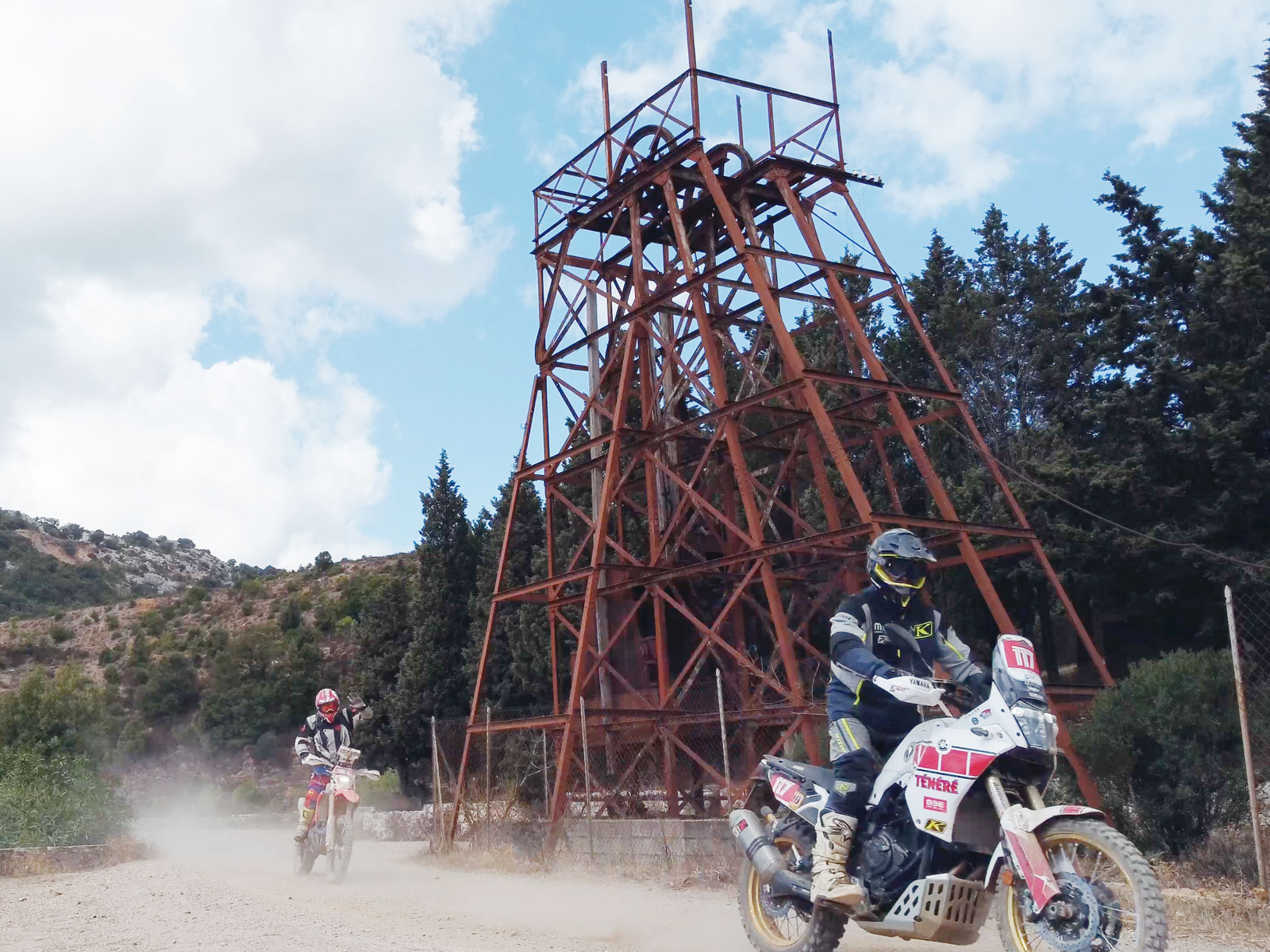 ×
Along Sardinia’s scenery and gravel roads

“I think what makes this rally special is the community – everyone’s so friendly and so happy to help each other out and cheer each other on it’s really extraordinary, and it doesn’t matter who you are – a complete newbie, a pro rider, a Dakar veteran, or someone like me who’s an adventure rider trying a rally race for the first time. It’s just people who love to ride, and it feels really cool and unique”, Sebastiaan, a Dutch-American rider aboard a custom Husqvarna 701, shared at the finish of the rally. 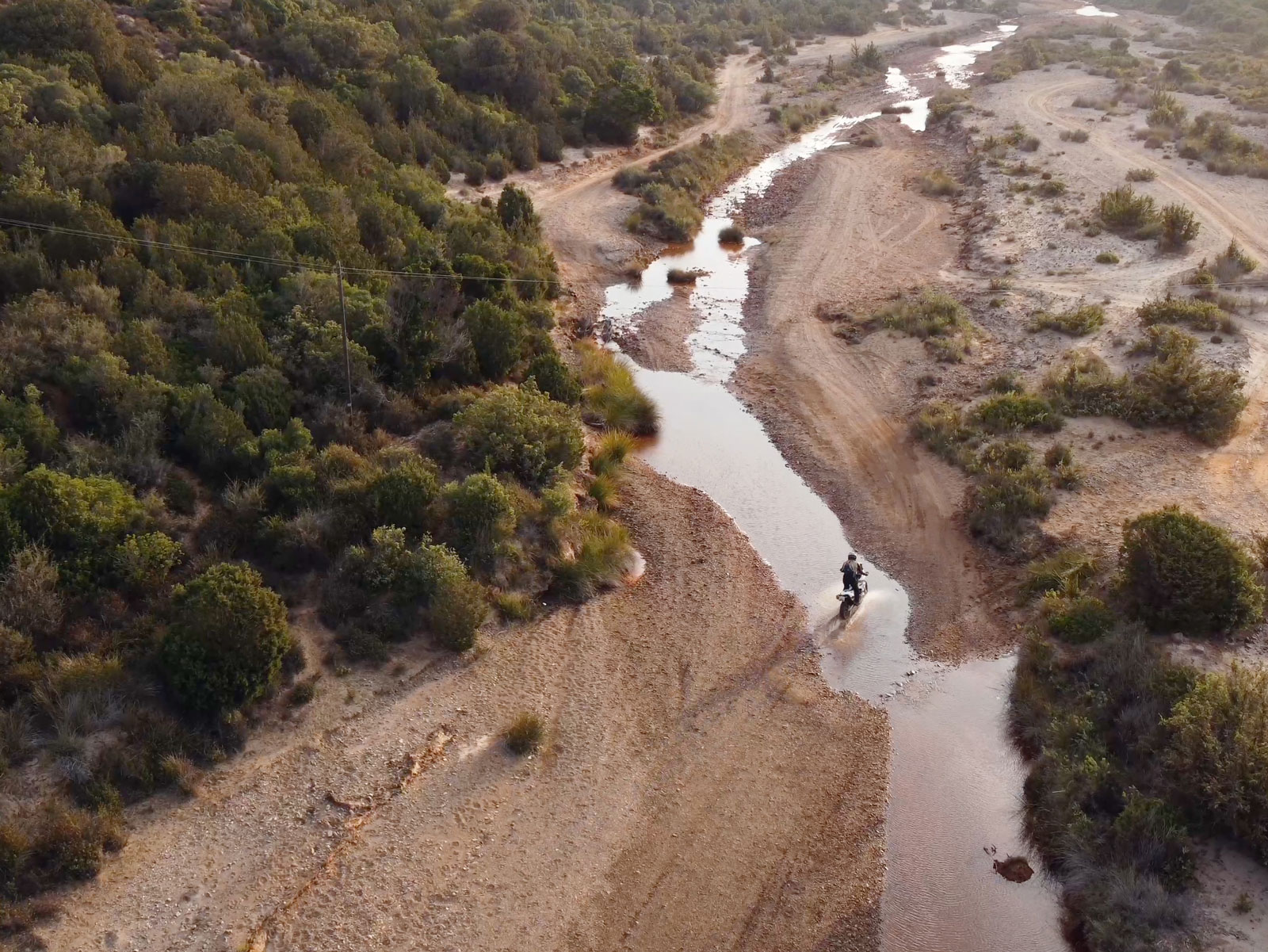 For us, that’s exactly what made Swank Rally di Sardegna an unforgettable event. A mad, long-distance cross-country race without the ugly side of competitiveness, a gathering of extraordinary people united by one passion, and a colourful festival of the craziest bikes imaginable, Swank stole our imaginations. Picture a raggedy band of extravagant misfits, old-school gentlemen and soldiers of fortune, Paris-Dakar legends and modern-day rally stars, dirt bike nutcases and custom motorcycle fanatics, adventure riders and enduro maniacs – then, put them on Italy’s most scenic, nostalgic, and remote island, give them roadbooks and a tank of fuel, let them loose, and pour them a cocktail at the finish line: this, in a nutshell, is Swank Rally di Sardegna. As our faithful MS Roma starts to dip and rise at alarming angles, buoyed by the massive rolling waves, I abandon my quest for caffeine and ask for an Aperol spritz instead. If there is one thing Swank has taught me, it’s to take things in stride, laugh in the face of a challenge, give it an honest go, and never forget tomorrow is not guaranteed. Ride, adventure, meet the unknown head on – and don’t forget to smile and say “ciao” while you’re at it.

While the Swank Rally di Sardegna attracts plenty of Dakar veterans and professional racers, it’s also aimed at complete rally newbies and adventure riders. If you’ve been riding off-road for at least two years, feel comfortable on gravel, rocky trails, some sand, and single-track, and you own a dirt, adventure, or dual-sport motorcycle, you can enter Swank Rally di Sardegna and give it a go. The terrain difficulty. Swank Rally di Sardegna mostly runs along graded, hard-packed dirt roads, gravel roads, some sandy tracks, and some forest single-track. There are a few more technical sections like steep climbs and descents and rocky trails in between, but generally, the terrain and tracks are not highly technical. Since the Swank Experience class is not timed, you can tackle the more difficult sections at your own pace – you will be ranked according to navigation precision rather than speed. Experience level.You can enter Swank Rally di Sardegna if you’ve been riding off-road for at least two years and feel comfortable riding dirt at speed. There is no need to be a Romaniacs or Dakar level rider, but you should be reasonably experienced to handle long distances riding off-road. Suitable motorcycles. You can race Swank Rally di Sardegna on anything between 250 and 1200cc, and if you own a motorcycle made before 1999, you may enter the Vintage bike class. Dirt bikes, heavy BWW GS1200’s, Africa Twins, Yamaha Tenere 700’s, and Husqvarna 701’s are all popular at the rally, but you can also race on smaller bikes or medium-sized dual-sports: there are no limitations. Distances. Expect to cover 250-350 km every day, depending on the class you choose. Navigation. Riders are allowed to navigate either by roadbook or GPS. Logistics. Swank Rally di Sardegna bivouac (camp) moves every day, but the organization support trucks will carry your luggage and tools from bivouac to bivouac. Accommodation. Throughout the rally, riders stay at hotels. Entry. You can book your Swank Rally di Sardegna entry – here...