We can all agree there’s no better way to experience Portugal than riding it off-road. But a seven-day expedition from North to South is both and adventure and a challenge – especially when chasing fast riders aboard two loaded 650’s!

Out of a frying pan and into a fire: there’s no other way to describe our stint in Portugal right after finishing the SWANK Rally di Sardegna in Italy just a few days before. A rally race always takes a toll on the bike and the rider, but instead of spending some time to recover and maintain our motorcycles, we headed straight for another adventure: a seven-day Portugal off-road tour taking us from Amarante, Porto, all the way to Sagres at the very southern tip of the country. Arriving at our starting point in a traditional Portuguese quinta (converted ranch), we felt like we’d just landed in some secluded enduro paradise. Picture tranquil little cottages, a swimming pool at your disposal, and an entire motocross track to test out your bike and your mojo before the tour. 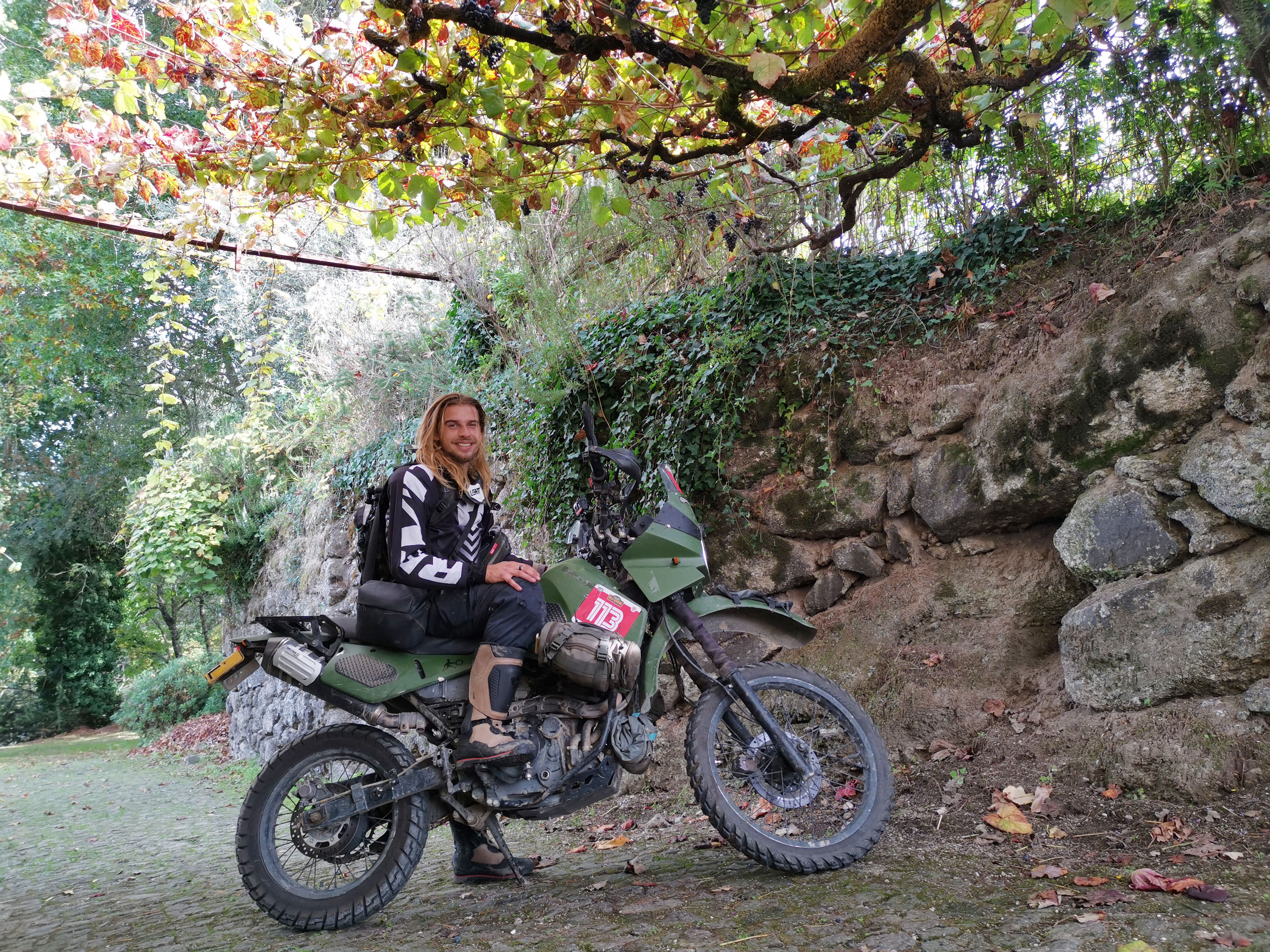 Paulo, our guide and the mastermind of our Portuguese dirt bike adventure, turned out to be a character: a hilarious host with a wicked sense of humor and a penchant for rock music, a chef, and a winemaker all in one, Paulo is as entertaining as he is experienced in riding off-road. After a brief pause at the quinta and a tour of the grounds, we met with the riders of the tour hailing from Spain and Mexico. Some of them trailered their own bikes, some rented them locally, and the team was assembled: we’d have a glorious traditional Portuguese dinner, a briefing, and a tasting of local wine, then get ready for the adventure.

Mornings can be chilly in Northern Portugal, but once you hear the rumble of dirt bikes and see riders gearing up, the blood quickly gets pumping. A mischievous grin from Paulo, engines on, kickstands up, and before we knew it, we were off riding the winding local trails toward the Douro Valley. 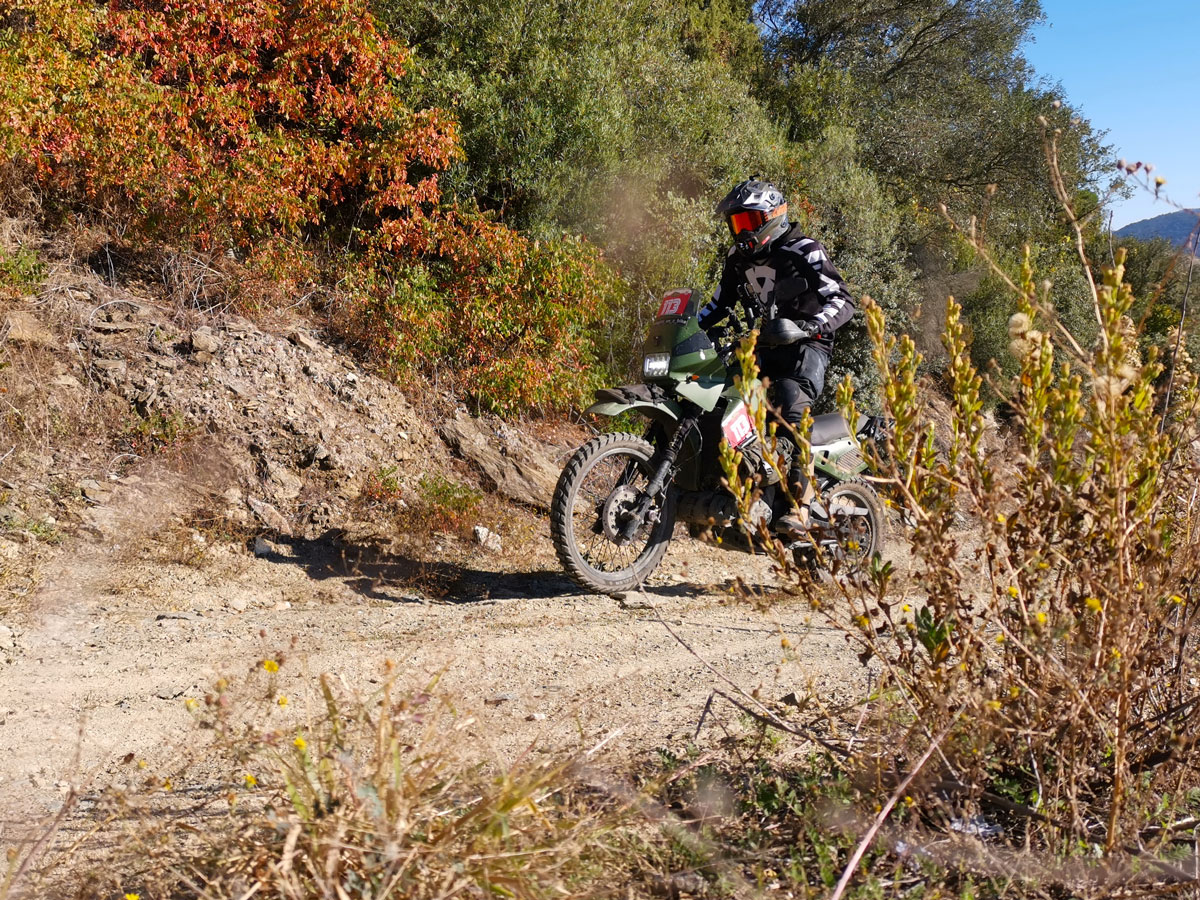 Easily one of the most spectacular regions in Portugal, Douro Valley is famous for its terraced vineyards, awe-inspiring Douro River views, and off-road trails that seem to crisscross the entire region in all directions. As MOTOURISMO Scouts, we join tours with the aim to film and photograph the ensuing mayhem, and it’s not always an easy task shadowing riders and capturing the best moments on camera. This time around, the challenge increased: we quickly realized the riders were going at a very lively pace, so if we were to keep up and document all the dirt-biking fun, we had better open up that throttle. 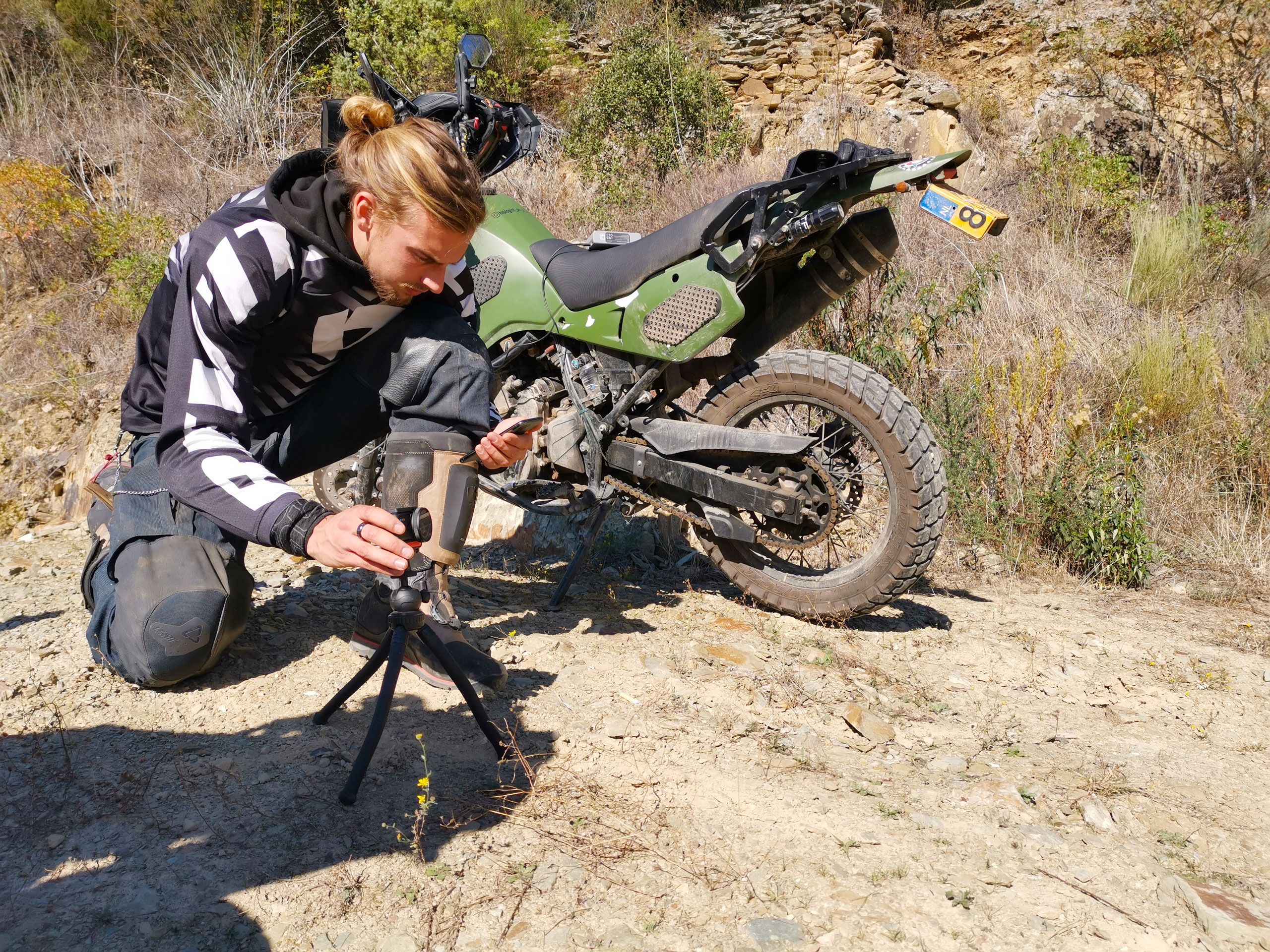 ×
Setting up shop on the side of a trail

On or off the road, every tour is different. Some focus on scenery and sightseeing, others on tarmac twisties, and others still, on the riding itself. The Portugal expedition was shaping up to be one of the latter: while we enjoyed truly breath-taking scenery every mile of the way, the focus was dirt, speed, and rally-style riding. 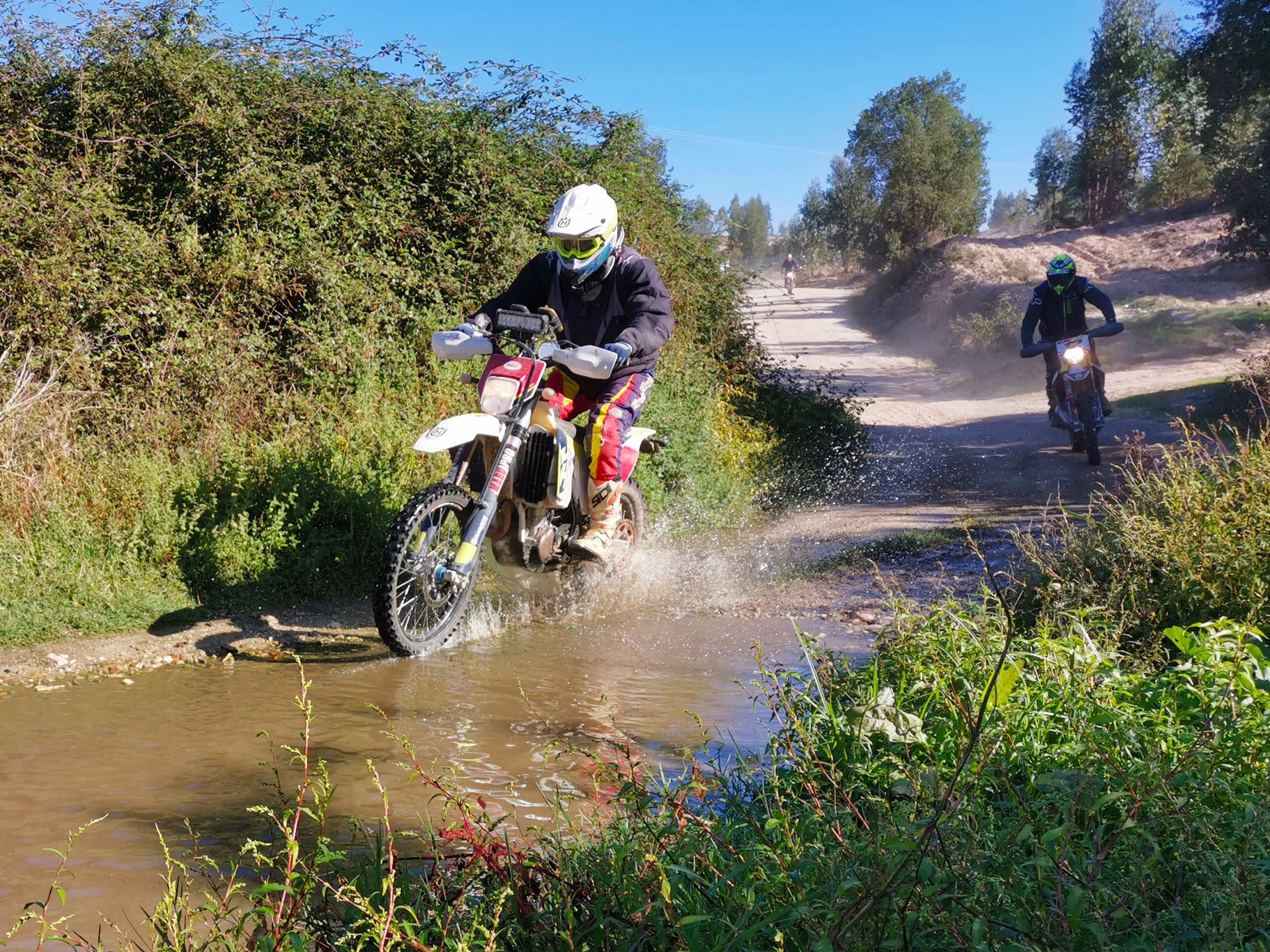 ×
Keep up or get lost

Scenic stops and quick picnic lunches on the roadside completed, the riders were always eager to jump right back on the bikes and hit the gas.

Roman Ruins and the Lord of the Rings

As we traveled South covering around 200 kilometers of dirt daily – Paulo simply doesn’t believe in pavement, and the entire route is designed to include as little tarmac as possible – the scenery began to change slowly, taking us across eucalyptus tree woods, farmland trails, and the stunning Alentejo region with a stopover in Evora. 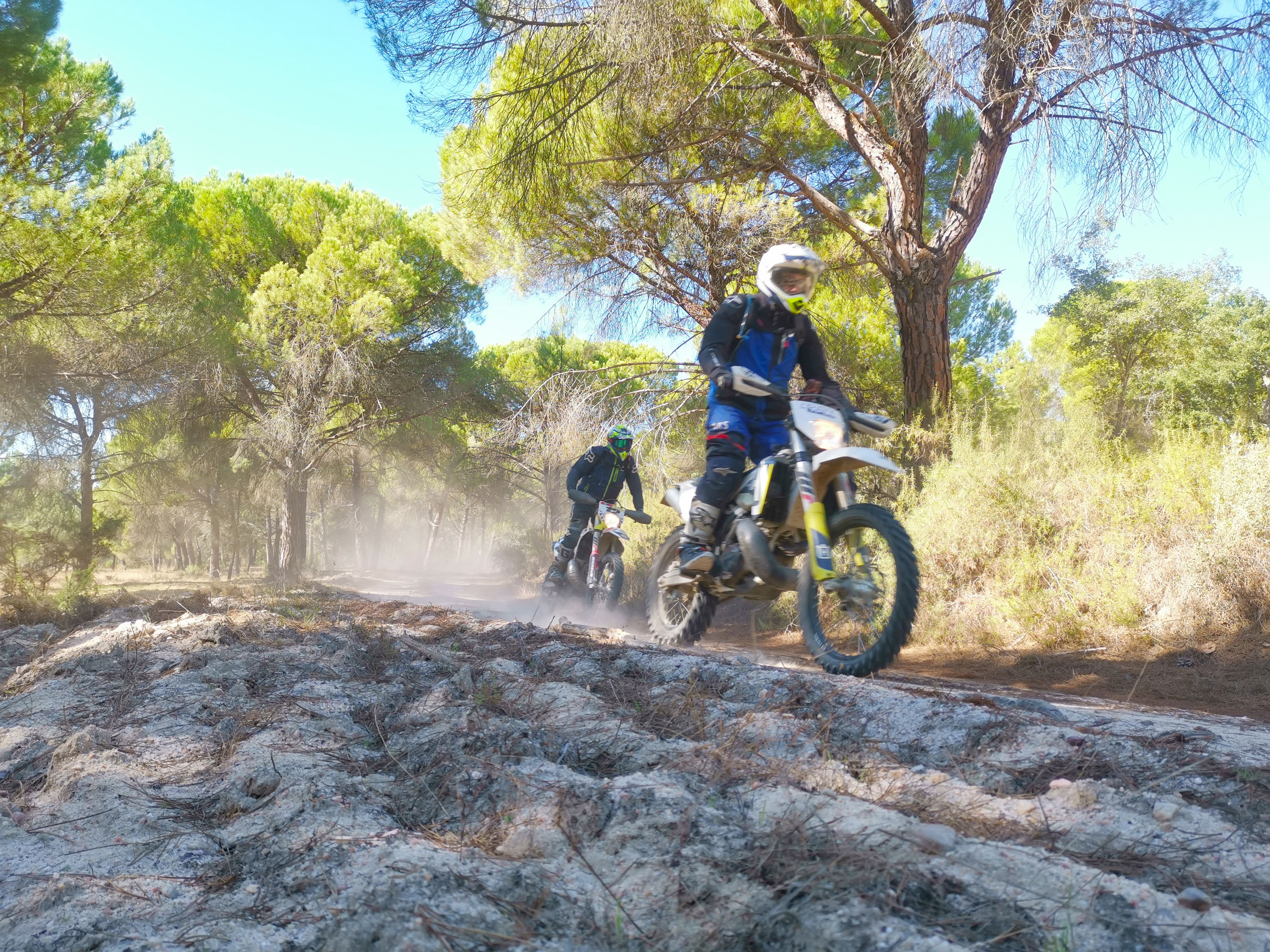 Probably one of the most beautiful inland towns in Portugal, Evora boasts a charming Old Town and a site of ancient Roman ruins right in the heart of the city. Although we only stopped there for a short break, it felt like time itself was staring back at us from the old temple columns, still standing sentinel over the square after centuries past. 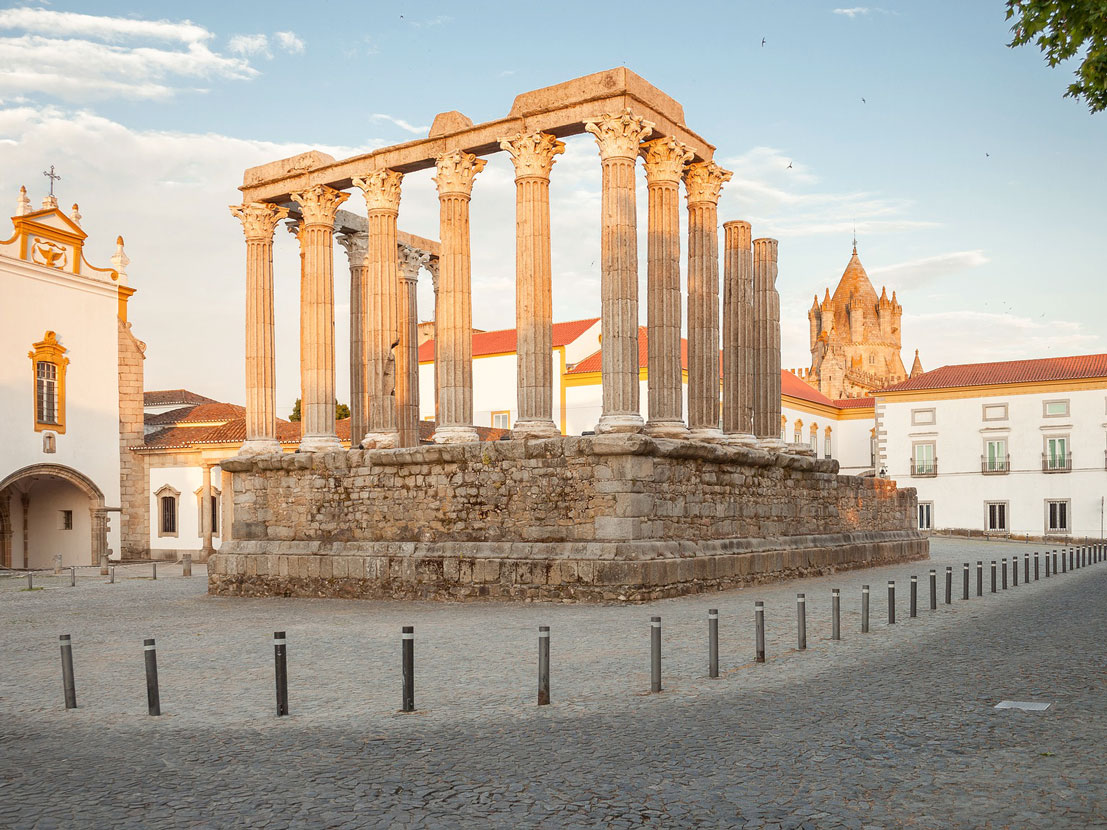 Traveling further South, we’d cross small medieval villages with cobblestone streets and follow narrow countryside trails walled by boulders and stone fences overgrown with moss, feeling like characters from the Lord of the Rings (the hobbits on the journey, not the noble Rohirrim – at this point, our pack mules were showing signs of wear). Every once in a while, we’d feel a little self-conscious about our loud exhausts and screaming dirt bikes, but the locals in Portugal don’t seem to mind enduro riders at all – in fact, we got waves and cheers from villagers giving us thumbs up and demanding wheelies as we rolled by. 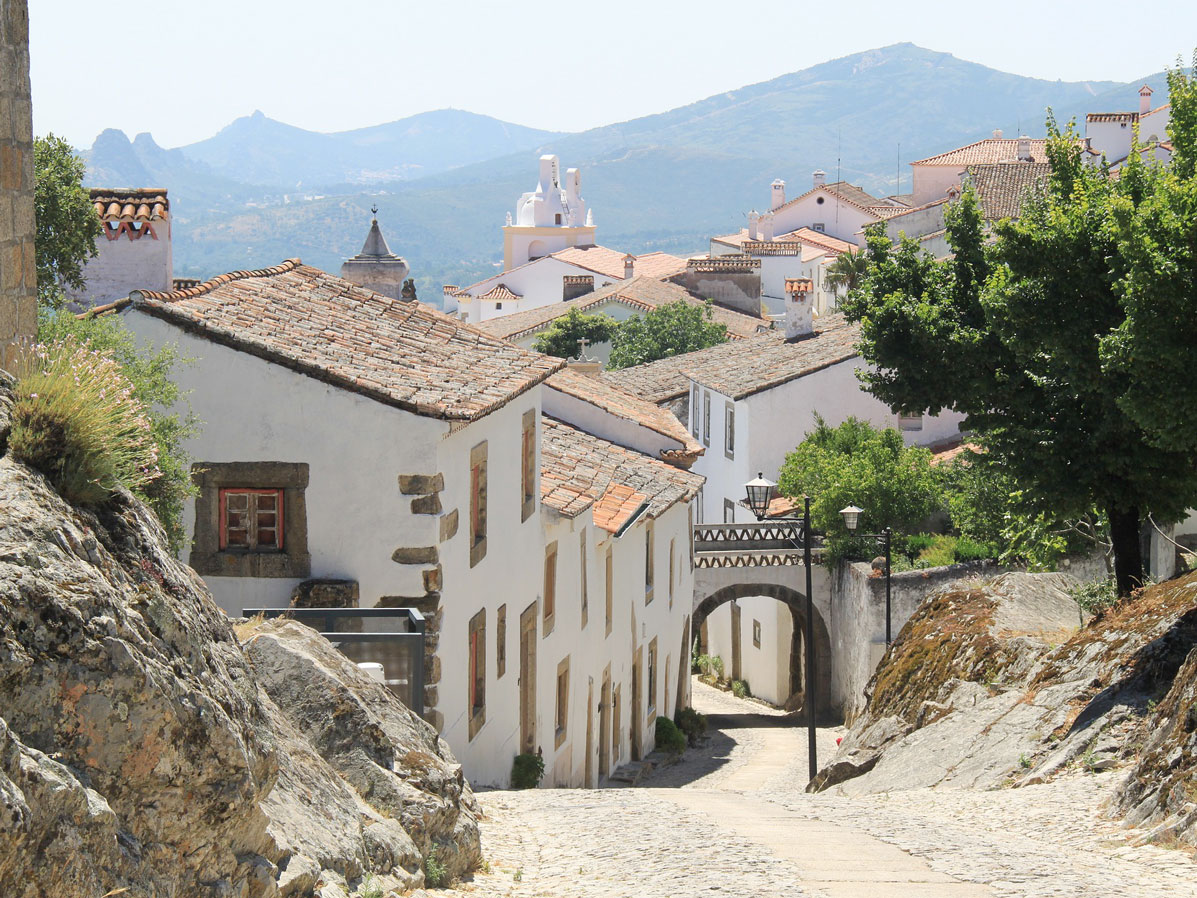 Aside from being one of the last off-road frontiers in Europe, Portugal also feels like a country that’s still madly in love with dirt biking – and food. Everywhere we stopped, the local cuisine and wine was to die for, and the picnic meals prepared and packed by Paulo himself allowed us to have lunch just about anywhere we wanted – on the roadside, a scenic lookout point, or by the river. 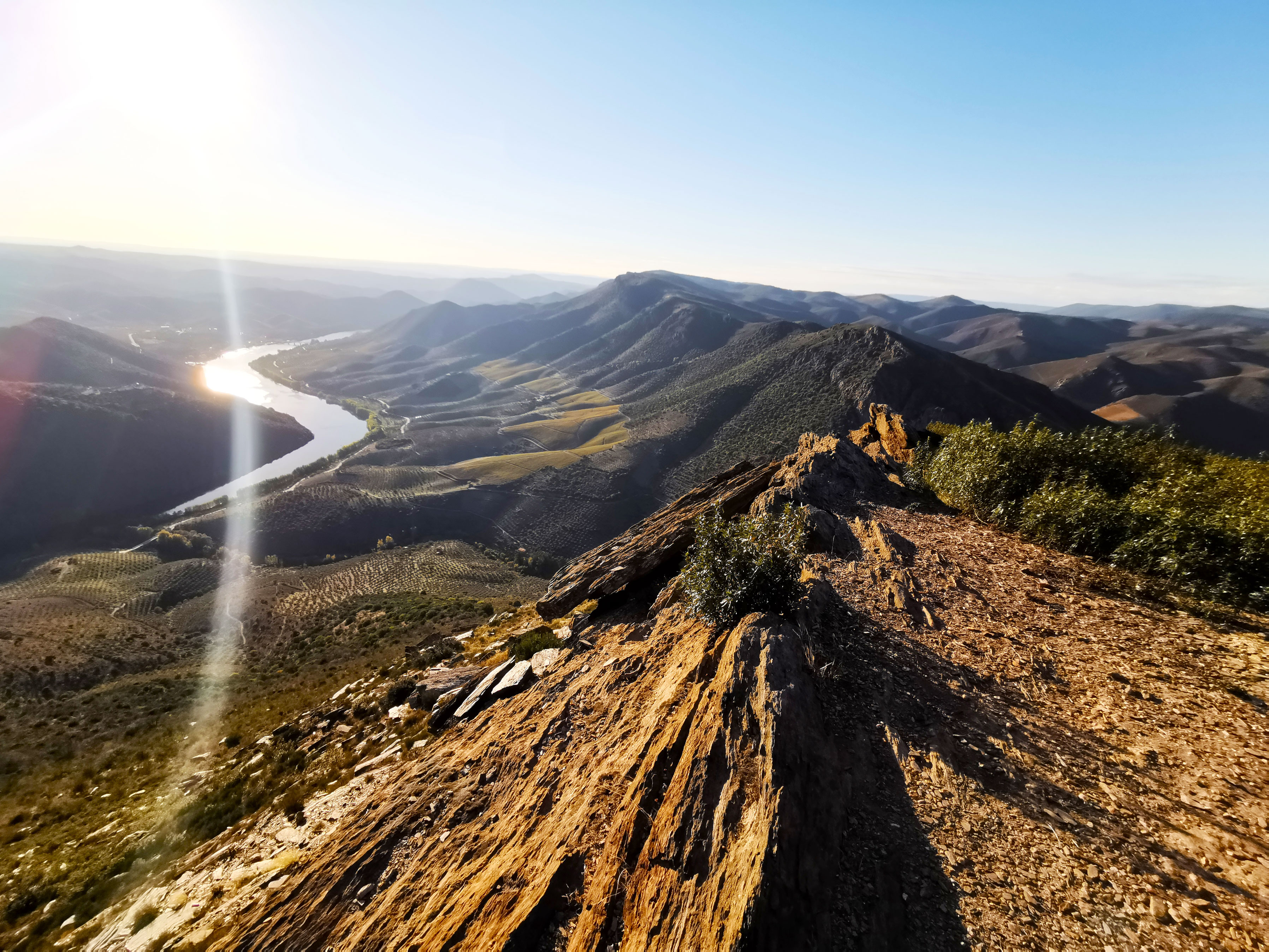 ×
Lunch with a view

Toward the last part of the tour, the landscape changed once more. Forest trails and rolling hills now gave way to dramatic coastal scenery with sandstone cliffs plunging into the Atlantic ocean, and gravel roads were replaced by sand. 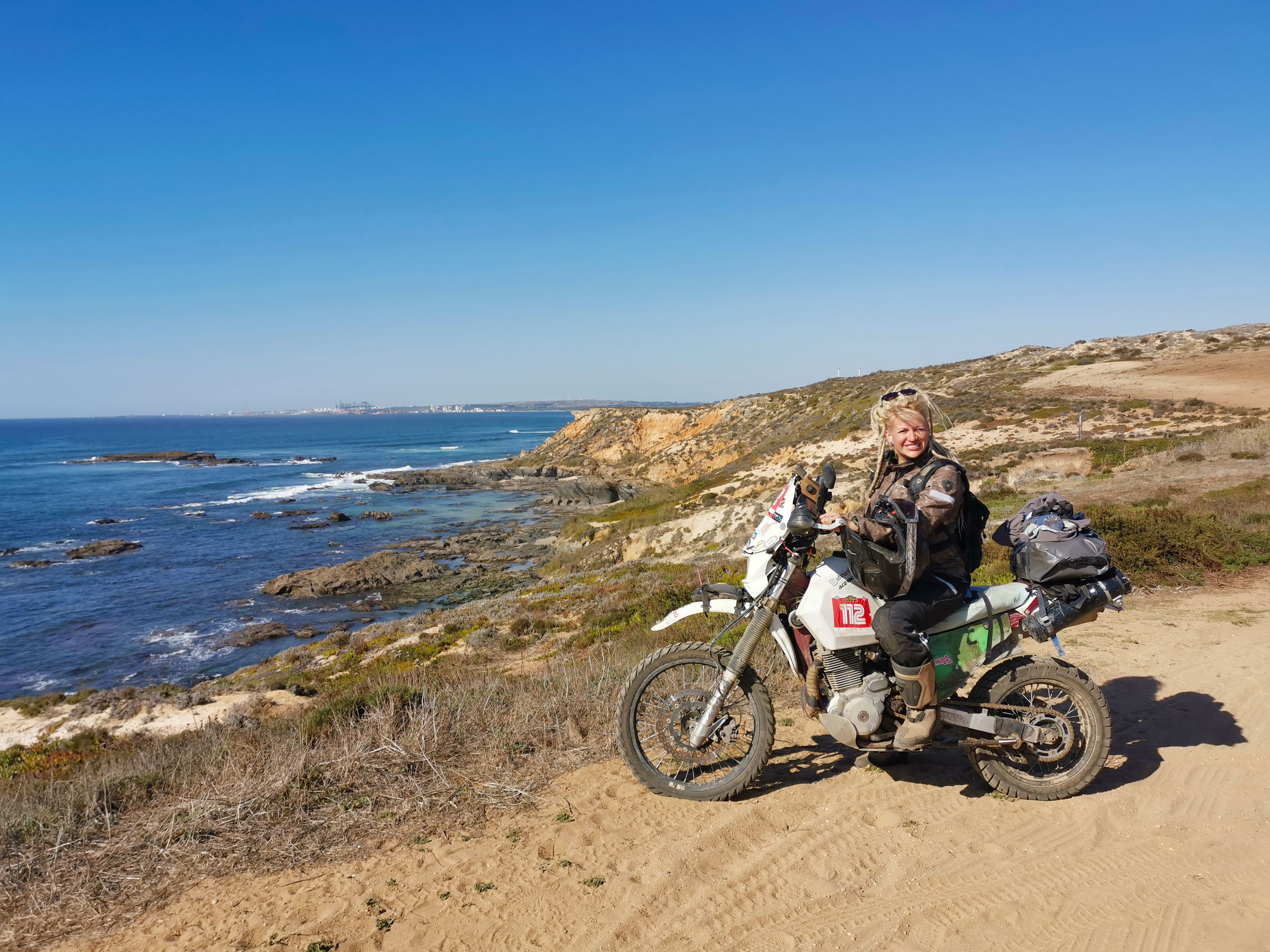 While we love a challenge, riding sand on two loaded 650’s with 50/50 tires was definitely an adventure, but, often aided by some very un-elegant paddling and waddling, we made it through. As my signature move, I dropped my bike at the most unlikely places imaginable, while Lennart managed to temporarily drown his at a water crossing – at this point, we figure it’s just part of our job to engage in misadventures. 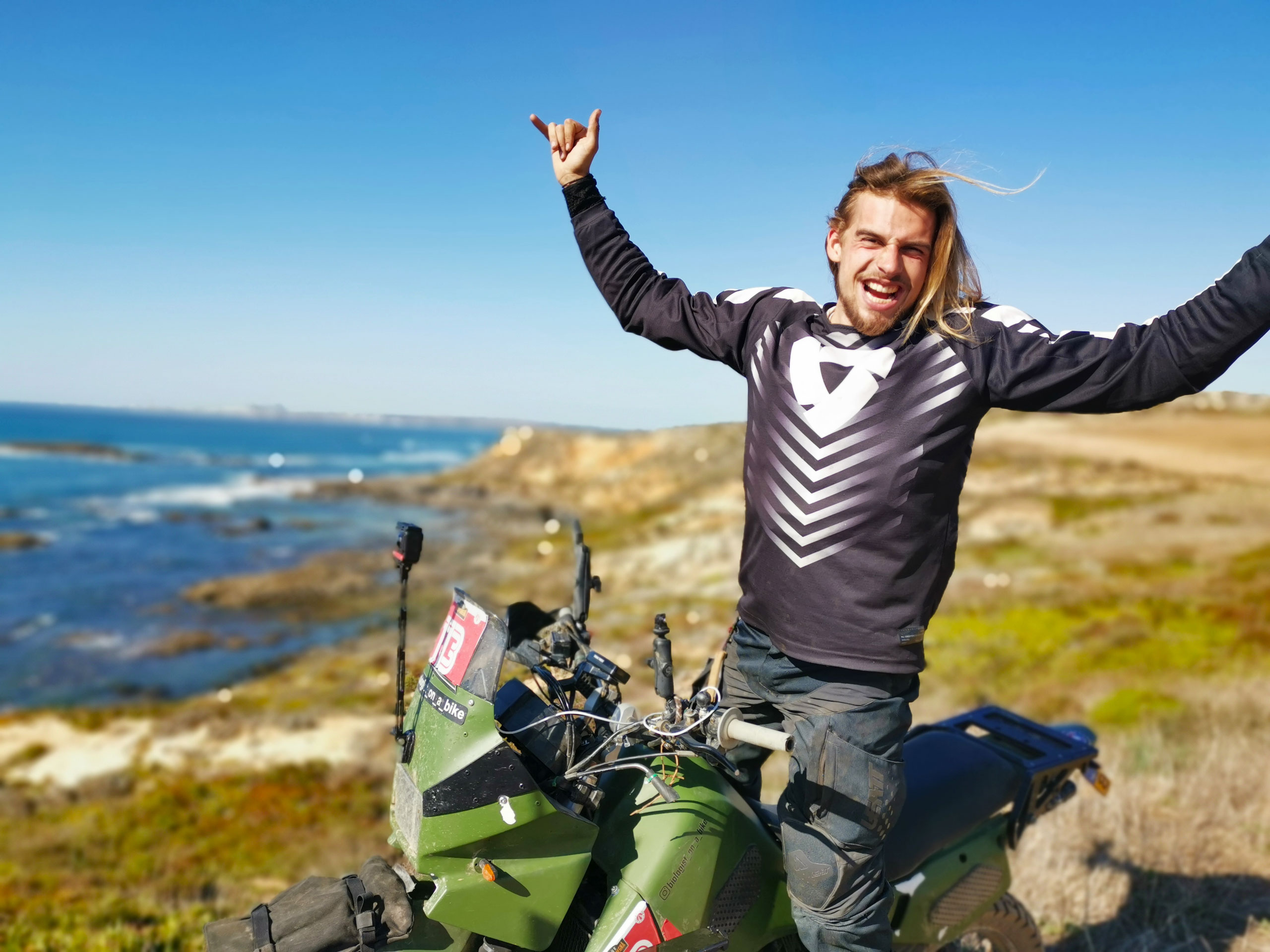 Seven days of enduro riding and covering almost the entire length of Portugal may sound like a lot, but as we arrived at our last destination, we realized it all felt like a magic blur – and came to an end way too quickly. Not one day was the same, and with every new route, the scenery, the local vibes, and the trails changed again and again making us feel like we were riding some fast-paced carousel across a dirt bike wonderland. 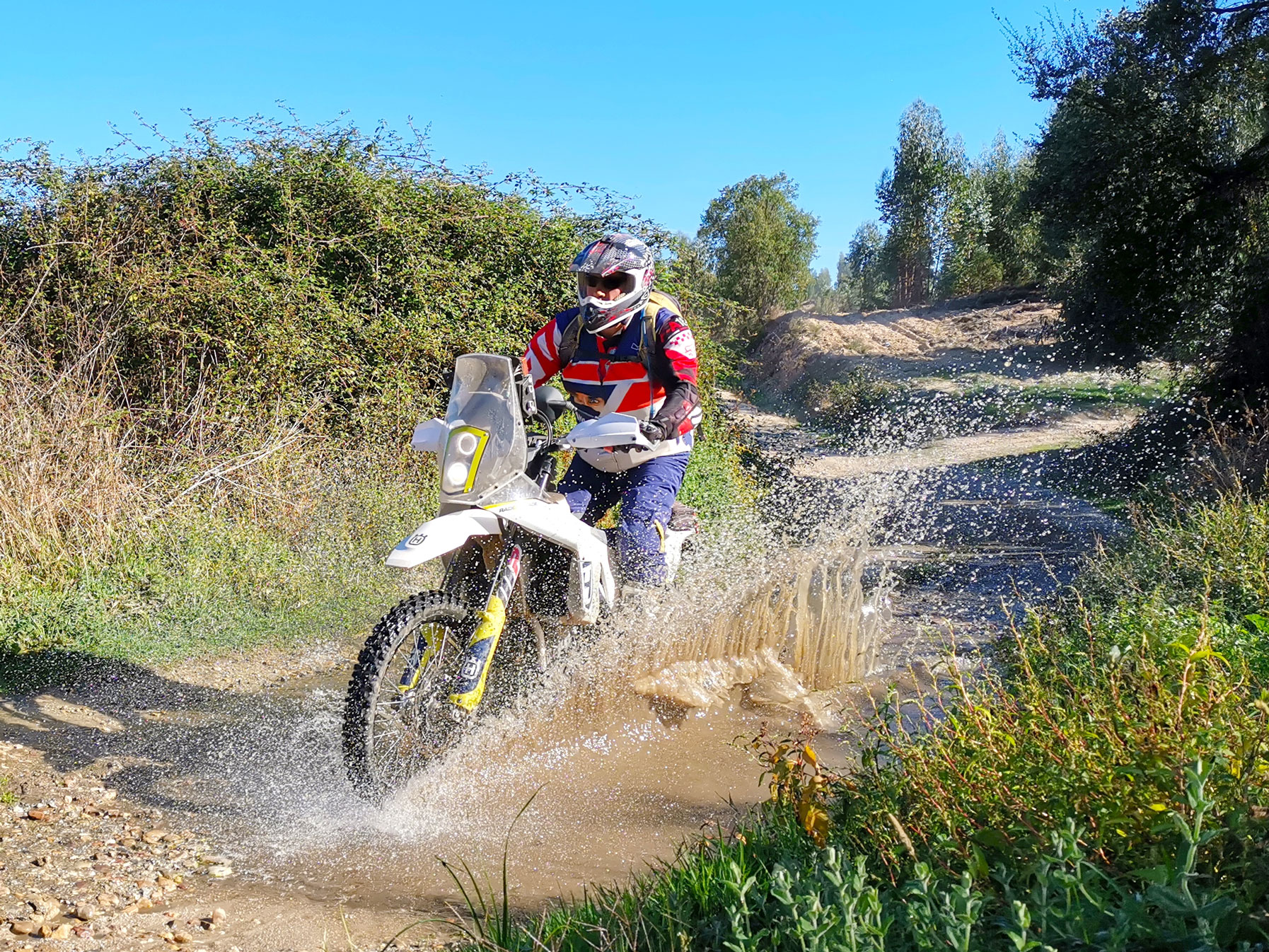 Riding Portugal off-road with a crew of like-minded souls who are throttle-happy and ready for some serious mileage is just about the best thing you can do to forget the outside world, let it all fall away, and immerse yourself fully in the motorcycling bliss day in and day out.

Who is the Portugal Off-Road Tour For?

If you’re thinking of going on an off-road expedition in Portugal, expect diversity in all senses of the world. The trails will vary from rocky mountain switchbacks to fast-flowing dirt trails, forest tracks, and sand; the landscapes will include picturesque terraced hills, mountains, valleys, woods, and coastal scenery, and each Portuguese region has its very own, very specific culture and atmosphere. 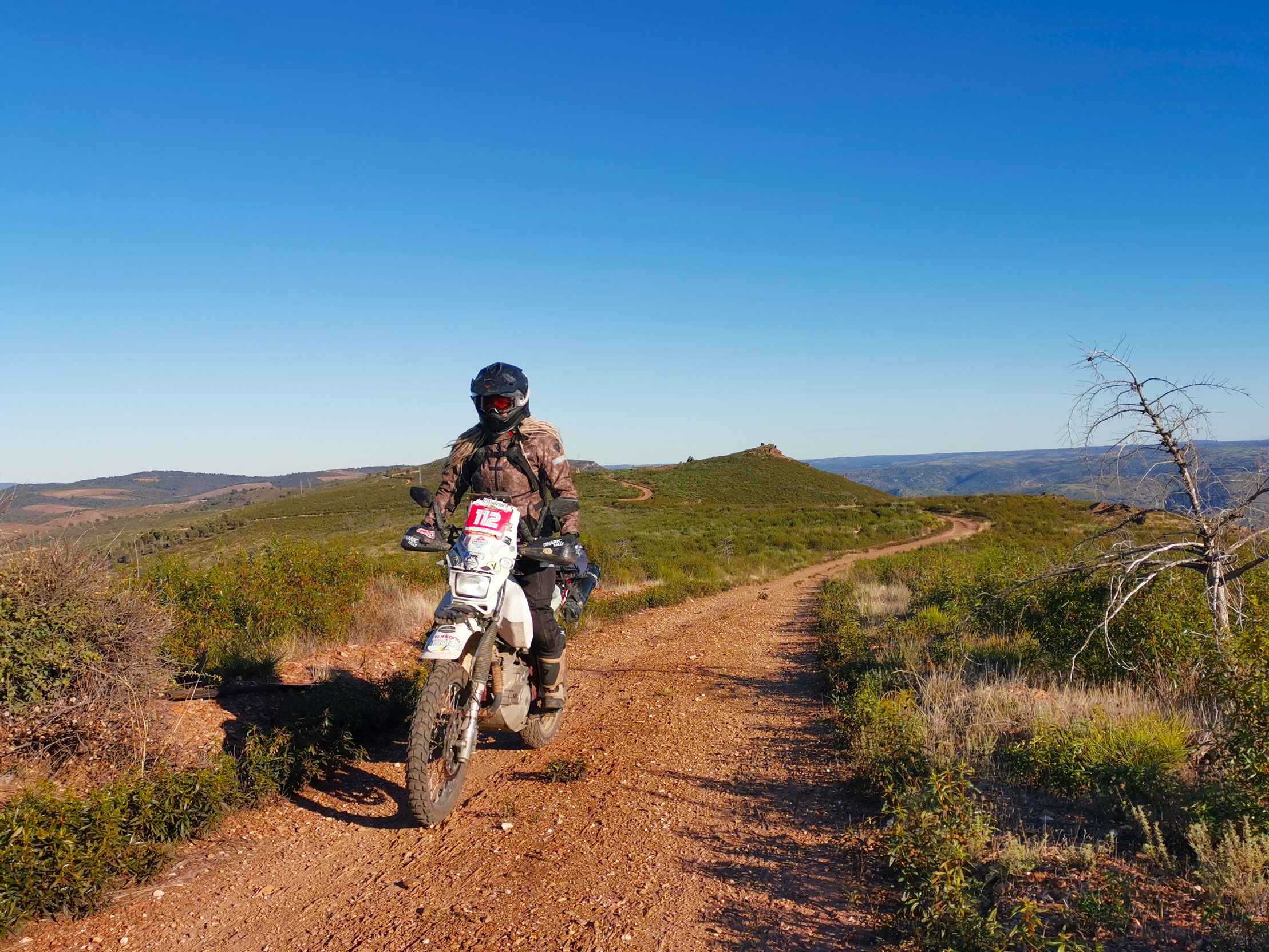 The seven-day tour isn’t for beginners, as you’ll need to cover some 200km each day, but it’s suitable for mid-level and advanced riders capable of tackling gnarly terrain ant eating up those dirt miles every single day. Ready to rumble? Book your very own Portugal off-road tour now! You prefer it one size smaller? Portugal also has that to offer – choose your perfect adventure one here...